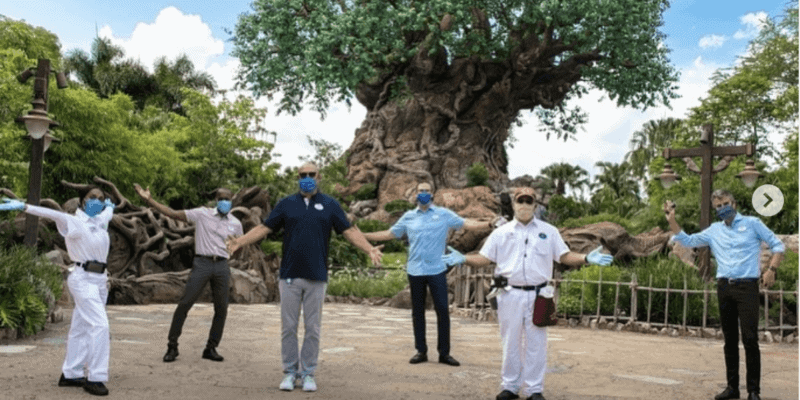 Last year, the Walt Disney Company made a difficult decision to lay off tens of thousands of Cast Members across Disney Parks and Resorts in the U.S., including employees of both Disneyland in Anaheim in Southern California, and Walt Disney World in Orlando in Central Florida. These layoffs also included a majority of the entertainment Cast at the theme parks.

Now, as we continue to move forward, and the Disney Parks continue their phased reopening, more and more Cast Members are able to return to work. In fact, during The Walt Disney Company’s Q2 earnings call last week, CEO Bob Chapek stated that 80% of Cast Members have returned to work at Walt Disney World!

And we are seeing that the Most Magical Place on Earth is continuing to recall Cast Members as one recently shared their offer letter to social media!

One former (and now soon-to-be) Cast Member took to both Reddit and Imgur to share that they received a letter offering them to return to work at the Most Magical Place on Earth! They write:

I’M GOING BACK! I was one of the 28,000 laid off last year, and today I can proudly call myself a Cast Member once again. I’m going home.

This is such exciting news as more and more Cast Members are able to return to make magic for Guests. In this case, the Reddit user, pjtheman, shared that they had to reapply to work for the company, commenting:

I had to apply again, but I strongly suspect CMs who were let go are being prioritized.

Congrats and welcome back! So happy for you and sorry that you have had to go through this for over a year. Best of luck on your return.

Congratulations, I truly hope the past year hasn’t been too hard on you financially/lifewise.

And there are several other comments that all express the same amount of excitement and congratulations for this Cast Member who gets to return to Walt Disney World and make magic for Guests once again.

Even though a majority of Cast Members have returned to work, our thoughts are with all of those Cast Members who are still being affected by this wave of layoffs. If you are looking for ways to help these Cast Members, check out our resource article here.

Have you ever had a magical moment occur because of a Disney Cast Member? Share your stories with us in the comments below.

Comments Off on More Furloughed Disney Cast Members are Returning to Work!