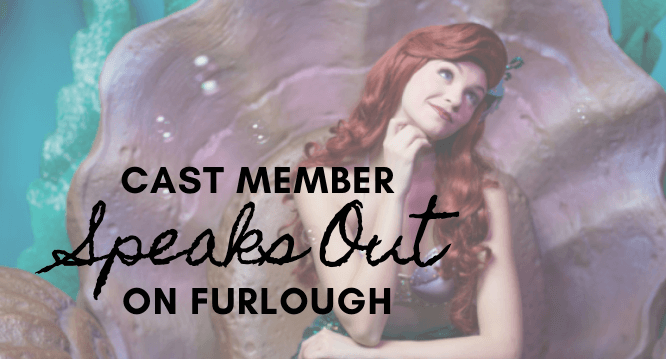 News channel WESH shares a story from Cast Member Sheila Ward, who works in live entertainment. Working with Actor’s Equity, Ward is under contract for one year as a Disney Cast Member and has spoken out on her furlough notice from Disney. Her voice is sad yet reflective and at the same time, Ward shares sympathy with her fellow Cast Members.

“Equity,” as it’s known, is a trade union representing theatrical performers. Shelia Ward’s contract with Disney is also an Equity contract, which deals in more specifics as a live performer than a typical Cast Member in Florida.

“I’m in live entertainment […] and I’m not sure what date I’m going back, so I just thought it was something letting us know they never thought it was going to last this long and here’s what you can do,” Sheila Ward said.

But instead, Ward told WESH that the email mentioned the furlough was indefinite, with zero mention of a timeline on how long the layoff would last.

Initially furloughed on April 19, Ward received an email addressed to her and other cast members from the Walt Disney Company. She wasn’t as panicked by the notice as some of her fellow Cast Members, relating that she had no small mouths to feed or others that were relying on her, but felt sympathy for those echoing each other’s concerns on social media.

“I think people are all — they’re sad about it and worried, they didn’t know what it means. I heard different things and I was trying to talk a few people off the ledge and say don’t panic yet,” Shelia Ward said. “I think they’ve done more than they ever thought they would have. The fact that our health insurance is being paid for is huge,”

If the furlough continues to last throughout the rest of the year (depending on when Ward’s contract was written for), Ward says she does get worried that she may not be called back as a cast member. Possible budget cuts may reduce shows even further, the parade may be cut, or stage shows may not need as many Cast Members. All of these possibilities will dictate the fate of the Equity performers like Ward.

“I’m worried because it’s a place I love to work and we have such great jobs creating magic for our guests every day, so I get concerned that a virus is going to mess with our 31-year career that I’ve had with them, so that concerns me,” Ward said.

As emails began to roll in on Monday, August 24th, 2020, Walt Disney World Employees were thrown for a loop, and some were scared. The verbiage in the email seemed to read like a firing letter or permanent laying off, instead of the estimated six-month furlough Cast Members were told of. “One Twitter user stating ‘Whoever crafted that Disney email just needs to be let go because I can guarantee you just had thousands of employees believe they were about to be fired through email y’all had me in the first half not gonna lie.'”

Others took to Reddit, mentioning Disney with words of thanks, despite their unfortunate current circumstances:

As a furloughed cast member who’s uncertain of my job, I just want to say thank you to Disney. I shouldn’t have taken all the moments for granted, from Traditions, to learning our key safety rules by walking around a 90 degree Disneyland, to all the people messaging me for free admission. Being on furlough and having the parks closed really showed me who my real friends and family were, the same people who bombarded me for free admission are the same people who can’t even shoot me a quick text asking how I am. If March 7th was really my last day working at the Happiest Place on Earth, I’m sure as hell gonna miss it.

The Disney Furlough in California

Disneyland workers have found themselves in a similar, if not exactly the same, situation. Emails to those Southern California Cast Members also went out recently, despite Disneyland Park and Disney California Adventure already having been closed for nearly six months. Downtown Disney has been able to recall some Cast Members to work, but with Disney remaining mum on opening the rest of the Disneyland Resort,  the near future looks bleak.

As the situation develops, we’re hoping that Disney shares news on it’s phased reopening in California soon, as well as emails Florida Cast Members to share possible dates of the furlough’s end. Many current Cast Members will begin looking for new work as time goes on.

Leave us a comment about the wonderful experiences you’ve had with Disney Cast Members, or what your thoughts on the continued furlough are. We’re listening!