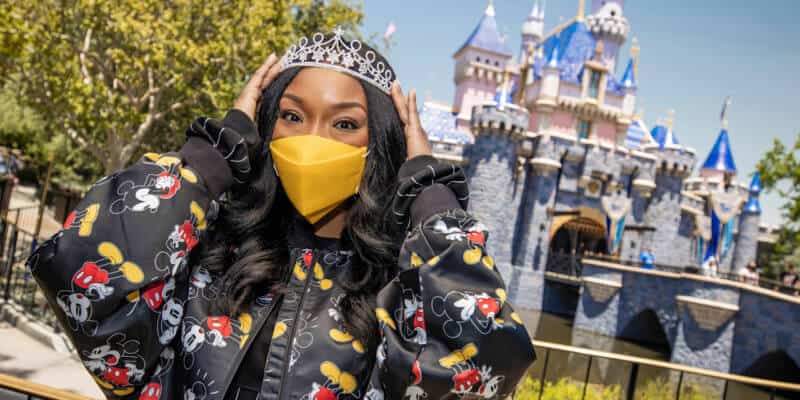 Disney is hosting the Ultimate Princess Celebration, and they kicked off the festivities with a visit from Cinderella herself, Brandy!

Brandy visited Disneyland and recorded an all-new song called, “Starting Now” in honor of the celebration. Read all the details of the Ultimate Princess Celebration, and listen to Brandy’s new song here!

As you likely know, superstar singer and actress Brandy starred in The Wonderful World of Disney, Rogers & Hammerstein’s Cinderella.

Disney’s Ultimate Princess Celebration is a special event that celebrates princesses and queens all over the world. Disney describes it as:

The Ultimate Princess Celebration is a yearlong event spotlighting the courage and kindness these Disney heroes inspire in fans all around the world. From Cinderella’s generosity and Belle’s ingenuity to Mulan’s selflessness and Moana’s adventurous spirit, Disney is honoring these strong heroes through music, experiences, products, and a campaign to give back to children around the country.

Brandy is the perfect person to sing an anthem for the Ultimate Princess Celebration! And Disney explained that her song, “Starting Now,” has lyrics that call back to famous Disney Princess songs. Disney Parks Blog gave us more details on the song, saying:

From the steps of Sleeping Beauty Castle, Brandy shared with us that it’s a dream to be a part of the celebration and that the anthem is meant to encourage people to be kind and loving toward one another.

The “Starting Now” single, produced by Grammy Award nominee Oak Felder and written by Jason Mater, Jordan Powers, and Darren Criss, was released by Walt Disney Records on May 21.

You can catch Brandy on Disney+ as Rogers and Hammerstein’s Cinderella was finally added to the streaming platform this past February.

Related:The Most Magical Hidden Spots Inside of Disneyland

Let us know how you plan to celebrate during Disney’s Ultimate Princess Celebration below!