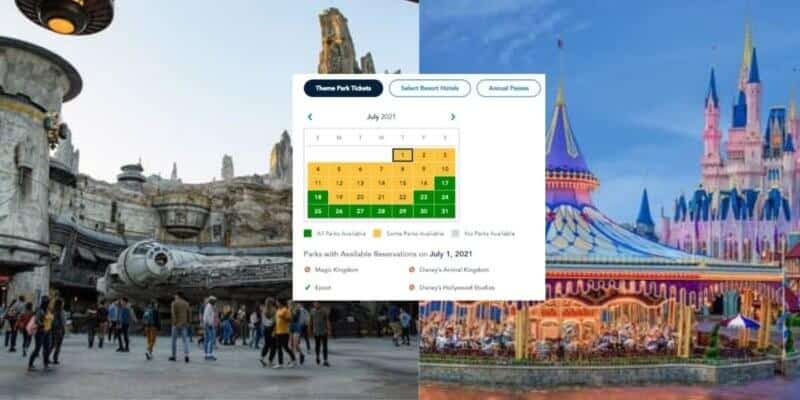 We are quickly learning that Walt Disney World has been an extremely popular place this past year. As Disney relaxes health protocols and is welcoming more Guests to the parks, we noticed how Disney World is resembling how it once was pre-pandemic.

If you haven’t been to Walt Disney World lately and are planning on going this summer, keep in mind that Disney World wait times have slightly increased as more Guests are becoming vaccinated and capacity is increasing.

With that being said, we were shocked to see that Disney fans are taking advantage of more park passes being distributed and booked them even quicker than we expected! Here’s what we noticed.

We last shared how Theme Park Ticket Holders and Disney Resort Guests could choose a Disney World Park Pass for all four theme parks from July 4 to July 31. Now that doesn’t seem to be the case. From July 1 to 16 and 19 through the 22, Disney’s Hollywood Studios park pass is completely booked up. This isn’t a huge surprise since we’ve mentioned in the past just how popular this park is, as it is home to the new Toy Story-themed land and Star Wars: Galaxy’s Edge.

Magic Kingdom has and always will be a popular spot and for good reason! Home to the iconic Cinderella Castle and offering a blend of family-friendly and thrill rides, it is typically the theme park that books up the fastest. So far, these are the following dates that are occupied by Theme Park Ticket and Select Resort Hotel Guests.

Also to note, Disney’s Animal Kingdom is booked but only for one day, July 1. There is still hope for all you Hollywood Studio and Magic Kingdom fans. Guests who are planning to visit in the summer can still reserve a park pass on the following dates,

All four Disney theme parks are available for these dates and will disappear soon, so if you have purchased tickets or are planning to stay at a Walt Disney World Resort, it is best to follow up by visiting Walt Disney World’s website and booking your specific theme park dates immediately.

Those Guests who are Annual Passholders have nothing to fear for July. The entire month is lit up in green as all four Disney theme parks are available. As we can see, the only date that is unavailable to reserve a park pass is July 4 for Magic Kingdom. As a reminder, this will change quickly over time, especially for Disney park, Magic Kingdom, and Disney’s Hollywood Studios.

Keep in touch with Inside the Magic as we update you on Walt Disney World Theme Park Reservation for Magic Kingdom, Disney’s Hollywood Studios, EPCOT, and Disney’s Animal Kingdom this year, and as we are all anxiously anticipating celebrating Walt Disney World’s 50th anniversary this October.

Did you book your July Reservations over the last few days? Are you planning on visiting this summer or waiting to visit during non-peak months? Let us know in the comments below.