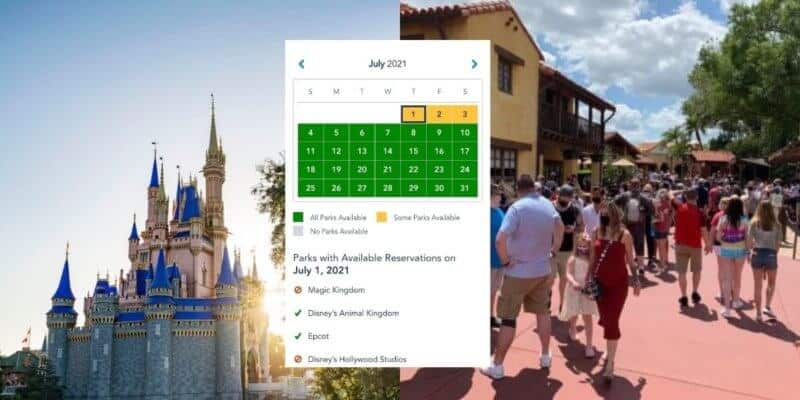 As more Guests are becoming vaccinated and theme parks in Orlando are relaxing their safety and health protocols, it seems Disney Guests are planning their summer vacations to Walt Disney World. We also noticed that Disney World wait times were increasing steadily as capacity increases.

Recently we shared that Disneyland refilled their theme park reservation availability as Disneyland and Disney California Adventure were allowed to increase capacity. We are happy to report that Disney has also added many more reservations in July for Walt Disney World!

Previously we shared how July was a very popular month to visit the theme parks, and many Disney Park Pass reservations were quickly being booked, especially for Magic Kingdom and Disney’s Hollywood Studios. According to the Walt Disney World website now, many of these dates have been replenished.

Theme Park Ticket Holders and Select Hotel Resort Guests can now choose reservations for all four theme parks from July 4 to July 31. Keep in mind that Disney’s Hollywood Studios has become extremely popular due to two very popular lands, Toy Story Land and Star Wars: Galaxy’s Edge. If you’re planning a relaxing park day, we encourage you to book Disney’s Animal Kingdom to get away from the crowds.

From July 1 to 3, Magic Kingdom and Disney’s Hollywood Studios are currently booked, but Guests can still book EPCOT and Disney’s Animal Kingdom those days.

When reviewing the availability for Annual Passes, the only change that we noticed was July 4. Please note that Magic Kingdom is booked for July 4, but all other dates are completely free for all four Disney theme parks. We do recommend choosing your theme park reservations soon as we have noticed a huge change in availability at Disney World as the Florida Disney Parks are steadily welcoming back more Guests.

As the state of Florida is continuing to head “back to normal” and lift restrictions, remember that Orlando theme parks are still operating with their own guidelines in place, so keep checking with Inside the Magic for updates regarding rule and regulation changes at Walt Disney World Resort and Universal Orlando Resort.

Are you planning to visit Walt Disney World this summer? Have you seen a change in theme park crowds since a prior visit? Let us know in the comments below!