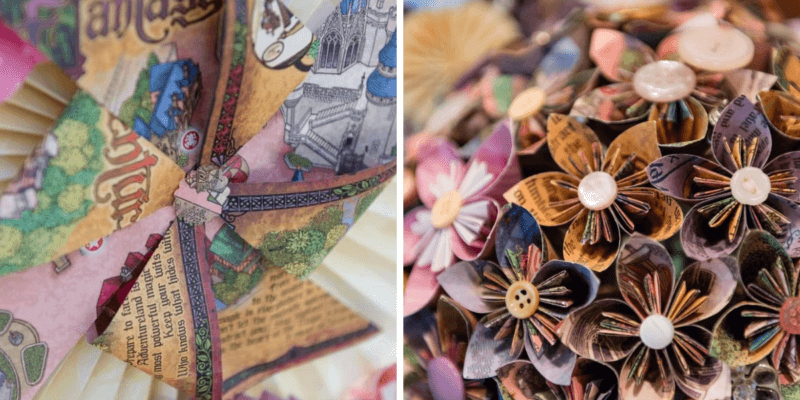 Lots of Disney fans find ways to bring a little hint of the parks into their big day — some even get married inside of the parks! But one fan was able to upcycle maps that were used for the now-defunct Sorcerers of the Magic Kingdom game and turn them into lovely wedding decorations.

You have to see the detail and craftsmanship of these Disney wedding decorations!

Related: Say “I Do” to 30 Years of Disney Weddings With New Dresses!

Sorcerers of the Magic Kingdom

Over on Reddit, user Choirpunk shared how they were able to transform old maps that were once used to play the Sorcerers of the Magic Kingdom game at Walt Disney World into decorations for their wedding!

Reddit user Choirpunk did a beautiful job taking these maps and making them into something truly special. They must have been a big fan of the game!

Check out these tiny flowers. How sweet!

We are so glad that Choirpunk shared this incredible crafting on Reddit. There are plenty of ingenious ways to incorporate Disney Parks into your wedding, you just have to use your imagination!

If you want to get married at a Disney theme park, Resort hotel, or on the Disney Cruise Line you have to check out our Dinsey Wedding cost guide here. Disney calls weddings that they put on “Disney Fairy Tale Weddings” and while they are certainly magical this Reddit user just showed how with faith and pixie dust a wedding outside of Disney with your own decorations can be just as lovely.

Let us know what you think about this crafty wedding idea in the comments!

Comments Off on Wedding Decorations From Defunct Disney World Game!