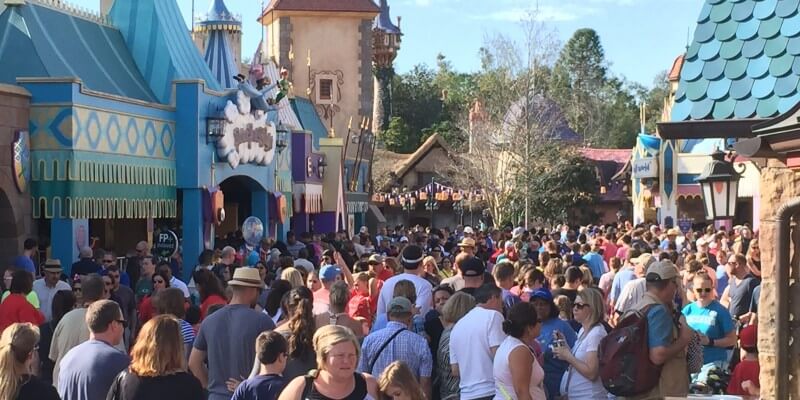 Now that Disneyland Resort and Walt Disney World Resort are both open and heading toward “normal” in a phased approach, it has been interesting to see how each theme park resort will return to pre-pandemic operations.

Today, during a question and answer session with Disney CEO Bob Chapek and J.P. Morgan, we discovered a lot more about how Disney plans to normalize their theme park operations. Both Disneyland and Disney World have been operating on very separate schedules when returning to normal. For example, Disney World no longer requires Guests to wear masks outdoors, while at Disneyland, masks are still required unless stationary while eating or drinking. Both theme parks also have different capacity limits, which match guidelines set out by each state.

That being said, Chapek wants things to get back to normal as soon as possible. The CEO noted:

We are encouraged by the trends that we see and our goal is to try to get to normalized operations as soon as possible, as soon as practical and as soon as responsible. We are encouraged by some of the changes that we’ve seen in terms of the CDC guidance, in terms of social distancing and mass guidance at the same time, there is a lot of detail behind those headlines and we are trying to digest those and make sure, as I said, that when we do reopen, we reopen in a way that’s very responsible.

Considering Disney World has continued to move in an upward trajectory, and Disneyland is likely to follow suit, it is not surprising to hear Chapek state this. In terms of capacity, we already know that Disney World has increased its capacity from 35%, and it seems that those increases will continue.

I think what you are going to find is low double-digit increases in the next several months in terms of our attendance as we sort of navigate some of these changes and some of these guidelines and do it in a way that’s kind of going to be sensible, if you will. I think you’ll see more of the full benefit of some of these relaxation of guidelines, whether it’s the social distancing or mask wearing closer to the Q4 the end of the fiscal year, we’ll see a lot more of the benefit there.

I think if you think about the throttles to the increase in attendance, I think there’s a couple of things we have to consider that sort of frame that up a little bit and one of them, of course, is labor. There is been plenty of headlines about how hard it is to get labor back. We’ve actually had a really good go at it. We have found that the great majority of our cast members who we called back are ready, willing and able to return.

Florida’s Governor is allowing Disney World to open at full capacity, so they have the option to make increases as they desire. Disneyland is also operating based on guidelines set by the State of California, which has a different reopening plan. However, California Governor Gavin Newsom plans to reopen the state’s economy on June 15, and we will see capacity continue to increase at Disneyland and Disney California Adventure after that.

Even as new information comes out regarding the pandemic and loosening restrictions, Chapek notes that there are “so many rules to be interpreted.” So even when a change can be made, Disney will take the time to analyze what that would mean for their theme parks. The Disney CEO said that the goal is to reopen in a “very responsible and very measured” way regarding health and safety and relaxing guidelines.
At the moment, both Disney World and Disneyland are missing major offerings such as FastPass+ at Disney World and FASTPASS/MaxPass at Disneyland, nighttime shows, and lots of entertainment. That being said, it seems that we will need to wait until full capacity is in reach to see big benefits return. Chapek didn’t note what benefits he was referencing; however, he did say, “We expect the benefits will be exponential as we approach full capacity.”
It will be interesting to see how quickly each park reaches “normal” operations, and when this will occur for both Disney World in Florida and Disneyland in California, given what each theme park resort is allowed to do depending on state guidelines That being said, CEO Bob Chapek predicts that more normalized operations will arrive at the theme parks by the company’s fiscal Q4 — July, August, and September.
When do you think things will return to normal at Disneyland and Disney World?