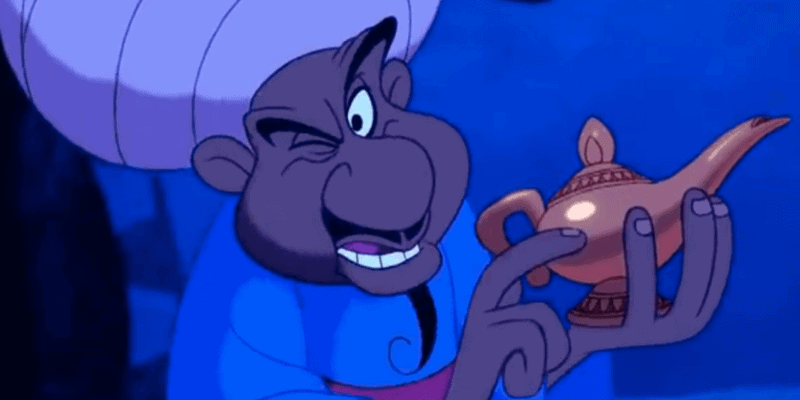 “Arabian Nights” from Aladdin is the opening song that tells viewers the story of Agrabah. The music is by award-winning Alan Menken and the lyrics are by the iconic Howard Ashman.

But, did you know that the original lyrics to this song were actually altered due to racist criticism?

According to the LA Times, Disney altered two lines of the lyrics in Aladdin after some Arab-Americans criticized the lyrics as racist. Per their report:

Disney said the change was made only after the studio obtained approval from the estate of the late lyricist Howard Ashman and from his collaborator, composer Alan Menken. Both won Oscars for their work on “Aladdin.”

The altered lyric, however, did not satisfy Arab groups. It was “nowhere near adequate, considering the racism depicted in ‘Aladdin,’ ” said Don Bustany, the president of the Los Angeles chapter of the American-Arab Anti-Discrimination Committee.

The original opening lyrics to “Arabian Nights” were as follows:

Oh, I come from a land

From a faraway place

Where the caravan camels roam.

Where they cut off your ear

The revised lyrics, which can be heard in the current version that plays in Aladdin, are as follows:

Oh, I come from a land

From a faraway place

Where the caravan camels roam.

Where it’s flat and immense

And the heat is intense,

So, as you can see by comparing the two versions, the lines that were altered were “Where they cut off your ear/If they don’t like your face” to “Where it’s flat and immense/ And the heat is intense”.

Related: Will Smith Responds to ‘Aladdin’ Co-Star Sfter Stating He’s Had No auditions Since Film Debuted

LA Times reported that the change was made in 1993 after meetings with the American-Arab Anti-Discrimination Committee back in :

Disney distribution president Dick Cook said the change was made after meetings with members of the American-Arab Anti-Discrimination Committee, but “it was something we did because we wanted to do it. In no way would we ever do anything that would be insensitive to anyone. So on reflection, we changed it.”

Disney+ has also added content warnings to many of its animated films including Dumbo, Peter Pan, and Lady and the Tramp. These films have also been removed from children’s profiles on Disney+.

Disney’s animated movie, Aladdin (1992), as well as the live-action Aladdin (2019), are both currently streaming on Disney+. If you are not yet signed up for the service, you can get started by clicking here.

Did you know that the lyrics to “Arabian Nights” were altered? Let us know in the comments below.

Comments Off on This ‘Aladdin’ Song Originally Had Different Lyrics