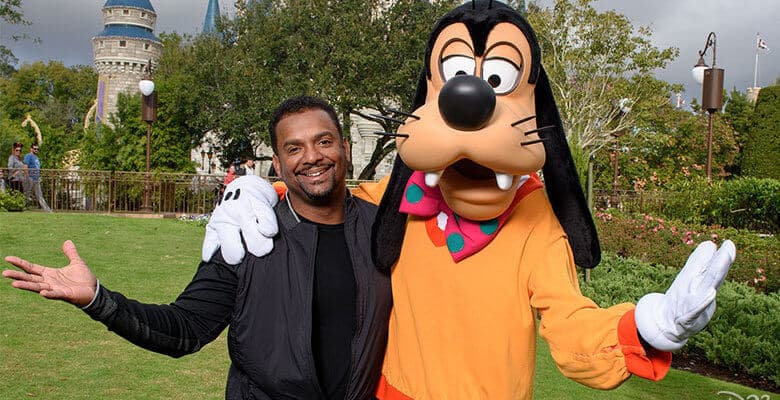 I think it is safe to say that Disney has become a huge part of my everyday life. Meeting the Disney community in person at the Parks and following along with Disney fans on social media is what truly makes me happy and allows me to forget the troubles of the world.

Recently, while catching up on Disney news, I came across a D23 podcast that featured a celebrity who also loves Disney as much as I do! Disney fan and America’s Funniest Home Videos host Alfonso Ribeiro shared some of his personal favorite Disney stories, including an invitation inside Disneyland Resort’s Dream Suite!

As a Disney fan myself, I love to hear celebrities who love Disney share their most personal stories and lists of favorite Disney movies, Disney characters, and more. Luckily in the D23 podcast, Alfonso shared his Disney preferences — and some might surprise you!

One of his all-time favorite animated Walt Disney Animation Studios movies that he loved growing up is, in fact, Lady and Tramp (1955). He shares that it was one of the first movies he ever saw as a child and the classic love story always stuck out for him.

As far as his favorite ride, Alfonso states, Space Mountain is a must along with family favorite The Haunted Mansion — and his most loved Disney song is “A Whole New World” from Disney’s Aladdin. The iconic song appears in both the 1994 animated version and the 2019 live-action remake starring Mena Massoud in the title role.

As far as characters go, Alfonso didn’t choose a classic Disney character, but a Marvel superhero, The Hulk. Growing up, Alfonso was always the smallest in the playground and was constantly picked on. He shared that believing he was just as strong and big as The Incredible Hulk helped him stand up for himself as a child.

Back then, of course, Marvel wasn’t owned by Disney. The company wasn’t purchased by the House of Mouse until 2009.

While visiting Disneyland, Alfonso shares that his all-time favorite experience and memory was staying overnight in Disneyland’s Dream Suite. Alfonso and his family, along with NFL football legend Steve Young and his wife and kids, were able to experience and walk around the entire Disneyland Park with absolutely no one around them!

The amazing Disneyland Dream Suite is the ultimate Disneyland stay and was awarded to random Guests as part of The Year of a Million Dreams. Located upstairs from Pirates of the Caribbean, this perfect Disneyland getaway features two themed bedrooms and a master bathroom with an enormous stained-glass window and sparkling stars that even showcase a hidden Mickey!

After being chosen to star in a two-hour special, honoring Disneyland’s 60th anniversary, we could all tell that Alfonso was a huge — and proud — Disney nerd. On the podcast, the Fresh Prince of Bel-Air star said that he wasn’t a huge Disneyland visitor at first and spent more of his childhood at Walt Disney World:

Now that Alfonso has a family of his own, he stated that he took his kids frequently to Disneyland pre-pandemic and wants to return when the hype of Disneyland’s recent reopening settles down.

Back in 2018, Alfonso experienced an emotional time when he was chosen to be a narrator for the Candlelight Processional in EPCOT at Walt Disney World. This is an honor that fellow celebrity and Disney fan, Neil Patrick Harris, has also enjoyed. Ribeiro stated:

“I gotta tell you that was a true highlight in my life as it pertains to Disney. It was so emotional, right, standing and I don’t know if everybody knows what the Candlelight Processional is, but essentially you’re standing in the middle, and you’re narrating you know the story and the orchestra are all around you, and so you’ve got the orchestra part, and then you have the choir, and it is like you feel it in your heart, in your bones, the music and the voices are coming from everywhere, it was magical it was absolutely so wonderful for me to do it.”

Check out Inside the Magic’s video of Alfonso’s time as the narrator at EPCOT’s wonderful and magical event below!

Listening to Alfonso’s personal experiences in Disney has made me an even bigger fan than before. If you want to know more about his amazing experiences, be sure to listen to the entire D23 podcast here.

Do you share a similar Disney experience? Have you been inside the Disneyland Dream Suite? Let us know in the comments below!

Need advice planning your next Disney adventure? Our friends at Academy Travel are EarMarked Diamond and can help!