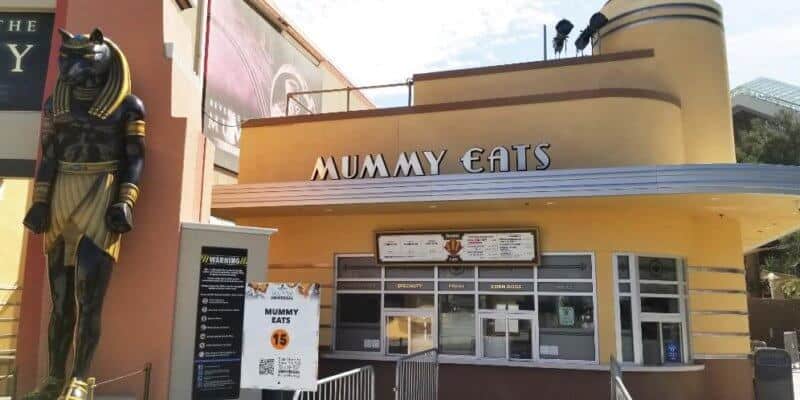 As Universal Studios Hollywood begins to gear up to the official reopening of the park, the current Taste of Universal event that has allowed Guests to re-enter the gates of this theme park is getting some upgrades.

Most recently, Universal announced that they were going to open the Lower Lot and include offerings from that section of the park, as well as the Upper Lot, which was previously the sole section that was open to Guests during Taste of Universal.

This announcement came just a few days before Universal Hollywood announced their reopening, which will commence on April 16 once the festival concludes. First, it was Jurassic Cafe that re-opened to Guests visiting the event, now Mummy Eats is joining the “now open” club, as we can see from Universal Studios Hollywood’s (@UniStudios) Tweet:

At the Park for #TasteOfUniversal? Mummy Eats on the Lower Lot is now OPEN! They have the Korean hot dog, a delicious S’mores Cupcake, four different churros, and more. Full menu in the Universal Studios Hollywood app. What are you going to try first?

At the Park for #TasteOfUniversal? Mummy Eats on the Lower Lot is now OPEN! They have the Korean hot dog, a delicious S'mores Cupcake, four different churros, and more. Full menu in the Universal Studios Hollywood app. What are you going to try first? ?? pic.twitter.com/DQdykmn8bI

For those who do not know, Taste of Universal is a ticked event where Guests can re-enter Universal Hollywood for the first time in a year, as it has been closed due to the ongoing pandemic. Although Guests cannot yet ride attractions, they can eat and drink to their heart’s content with the offerings available at the event.

However, now that we know Universal Studios is opening back up, it seems that all of the Lower Lot activity is likely happening now to get the theme park ready for its return after such a long shut down!

Plus, with Los Angeles County will be entering tier 3, the orange tier, this means that Universal Studios Hollywood will be opening to a higher capacity than possibly anticipated, so making sure that all of the popular food and eatery locations are up and running for Guests is important.

Once the park does reopen on April 16, Universal noted:

We’re rolling out the red carpet to resume operations and welcome guests back to the theme park beginning on Friday, April 16. Tickets can be purchased online beginning on Thursday, April 8. At this time, theme park visits are limited to California residents and party size is limited to a maximum of three households and ten people.

Experience your favorite attractions such as the Studio Tour along with the all-new “The Secret Life of Pets: Off the Leash” and “Jurassic World – The Ride”’s spectacularly realistic new dinosaur, Indominus rex.

But for the next couple of weeks, Guests can enjoy this special event that is happening during a crazy time in all of our lives, with more food to tag along in Universal’s Lower Lot!

Will you be going to Taste of Universal before the event concludes?

We can help you plan the perfect Universal vacation, click here for more information

Comments Off on Universal Studios Opens More of the Park to Guests!