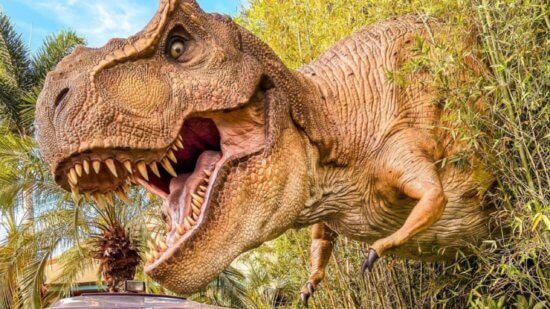 Well, that is exactly what happened when Florida resident Cristina Ryan told Fox that her security camera caught footage of what she believed to be a baby dinosaur scurrying across her lawn in the middle of the night, which you can watch here.

Once news broke of the possible prehistoric discovery, Universal Orlando Resort hilariously commented on the situation on Twitter.

<quickly counts all of the raptors>

<quickly counts all of the raptors> https://t.co/4NzAZYg28D

Considering Universal Orlando is preparing to open up Jurassic World VelociCoaster on June 10, and has been adding dinosaurs into their Jurassic Park section of Islands of Adventure, the comment was cheeky, but also made sense for the theme park.

Well, it seems that the west coast also wanted to join in the fun, as Universal Studios Hollywood (@UniStudios) has also re-Tweeted the article and hinted that the “baby dinosaur…might belong to them?

“Asset out of containment!”

It almost seems as if Universal Hollywood is picking up where Universal Orlando left off, which counted their dinosaurs to ensure it was not theirs. Today, the story continues with Universal Studios Hollywood joking that the dinosaur did indeed escape the theme park, as it is an “asset out of containment.”

Universal Studios Hollywood has finally reopened after over one year of closures and did so by introducing Jurassic World – The Ride to their Guests. On the newly refurbished ride, Guests can see the new epic ending with not one but two giant dinosaurs battling it out. That being said, the baby dinosaur discussion, although hilarious, does make sense for both theme parks to take part in.

When we reported on the original Tweet that Universal Orlando shared, many Inside the Magic readers took their guess as to what the creature was. It seemed that wild turkey, a giant reptile, and dog off its leash were some of the more popular guesses, but unless that baby dino lookalike makes another appearance, we will likely never know what it was exactly!

What do you think the running creature looks like? Would you assume it was a baby dinosaur if you caught it on your home security camera?