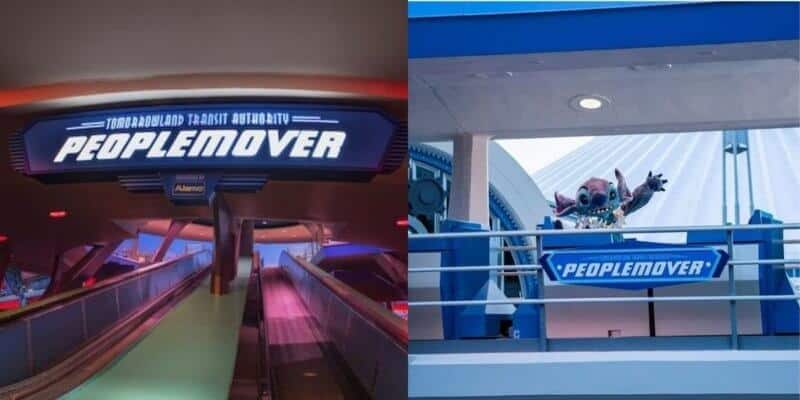 Disney fans have been dying to ride Tomorrowland’s famous Disney attraction, the PeopleMover in Walt Disney World’s Magic Kingdom for quite some time now. The attraction closed in 2020 and still has not reopened. However, Guests are now expecting the popular ride to be available again soon.

Well, it looks like one of our favorite Disney characters is making sure the Magic Kingdom People Mover is in tip-top shape before reopening.

This morning, the Disney Parks Blog Instagram account shared a photo of Stitch waving at the camera and testing out the Tomorrowland Transit Authority PeopleMover. Wearing a beautiful lei, it looks like Stitch is having the time of his life. This Disney attraction is one of Tomorrowland’s biggest and most loved rides and has been missed by many! Disney Parks Blog captioned the photo:

Stitch took a test ride on the Tomorrowland Transit Authority PeopleMover in Magic Kingdom Park this morning, prior to its reopening at @WaltDisneyWorld later this weekend!

This has been a long time coming. Disney Guests have been keeping an eye on Tomorrowland’s People Mover since Walt Disney World opens its gates in mid-July of last year. Thankfully, Disney World President Jeff Vahle recently commented that the PeopleMover will finally be opening to Guests again this weekend, following numerous delays!

For those of you who are unaware, Magic Kingdom’s PeopleMover is a relaxing attraction for many Disney Guests who want to sit back and enjoy the ride as they take a tour through Tomorrowland. This popular blue tram showcases a narrated tour inside Space Mountain, Star Traders shop and behind the scenes of Disney’s attraction Buzz Lightyear Space Ranger Spin.

Guests will also immerse themselves in the views of Cinderella’s Castle near Fantasyland and overlook Tomorrowland’s entire area. With that being said, we are excited that one of our beloved attractions in Tomorrowland will return and Inside the Magic will keep you informed when Magic Kingdom Tomorrowland’s PeopleMover will become available to ride.

Are you ready to ride Tomorrowland’s People Mover in Magic Kingdom this weekend? Let us know in the comments below!

Are you planning a Walt Disney World vacation? Our friends at Academy Travel can help! Click the link for more information!