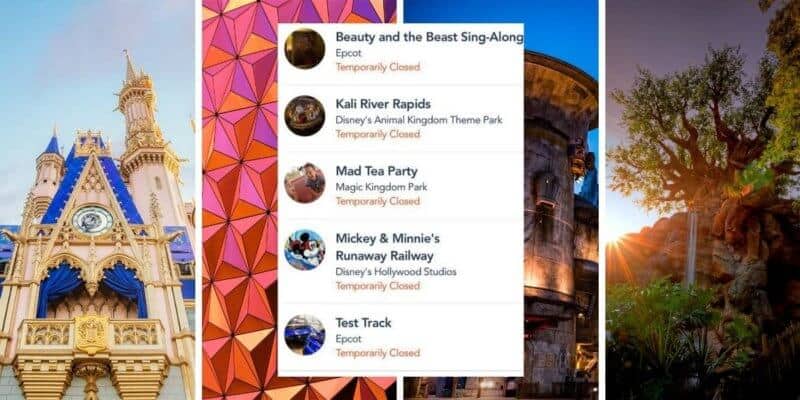 Walt Disney World is known for having some of the most fun and family-friendly attraction rides Guests will ever experience! Unfortunately, many of these rides and attractions are experiencing some technical difficulties this afternoon, Friday, April 23.

If you’re visiting Magic Kingdom, Disney’s Hollywood Studios, EPCOT, or Disney’s Animal Kingdom, you may want to double-check which rides are operating beforehand.

Below, we share which attractions are currently experiencing downtime, according to the My Disney Experience app.

On the My Disney Experience app, at 12:21 p.m. EST we noticed several attractions experiencing downtime including The American Adventure, Kali River Rapids, Living with the Land, and others.

At 12:24 p.m. EST, some of the attractions had reopened, including Mickey & Minnie’s Runaway Railway in Disney’s Hollywood Studios, however, others remained closed.

And at 12:30 p.m. EST, there were still several attractions down including The American Adventure and Kali River Rapids.

Within a half-hour, at approximately 1 p.m., there are seven attractions that are still unavailable. We can see that the Aerophile Balloon in Disney Springs is temporarily closed and in EPCOT, The American Adventure and Living with the Land are still down as well.

And other rides are down including the ever-popular Seven Dwarfs Mine Train attraction in Magic Kingdom and Rock ‘n’ Roller Coaster Starring Aerosmith in Disney’s Hollywood Studios.

Since this article was originally published, and at 3:12 pm, the attractions above have all returned to normal operations, with the exception of Seven Dwarfs Mine Train, Splash Mountain, and Aerophile Balloon Flight.

It is important to check the My Disney Experience app or speak with a nearby Cast Member for the most up-to-date information as rides can resume operations or experience technical difficulties at any given time.

Are you at a Disney Park today and are currently experiencing attractions with downtime? Let us know in the comments below.

Do you need help planning your next Walt Disney World trip? Our friends at Academy Travel are EarMarked Diamond and can guide you to the best Disney Dream vacation yet!