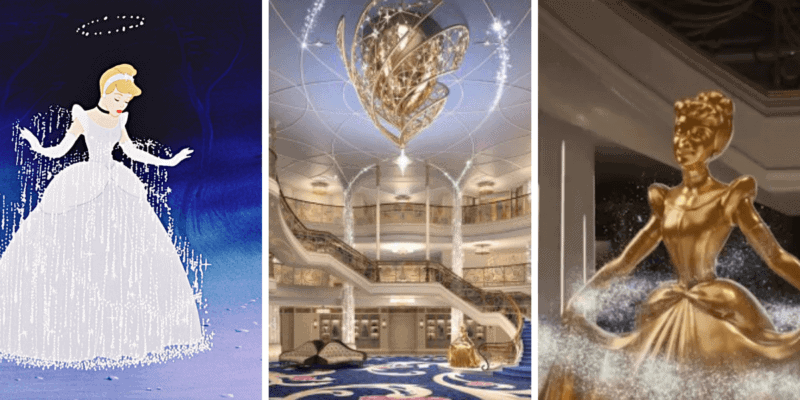 A dream is a wish your heart makes…

Did you wish upon a star while dreaming of the Disney Wish? Well, your dreams are coming true! Today, Disney Parks Blog released a special new look at the latest (and greatest) Disney Cruise ship to date — the Disney Wish.

The grand reveal of the Disney Wish is coming next week on April 29, and we at Inside the Magic can’t wait to bring the dazzling news straight to you. But today, we have another special treat thanks to Disney. A new look into designing the Disney Wish has officially been released — and it’s spectacular!

There are currently four ships in the Disney Cruise Line fleet — the Disney Magic, Disney Wonder, Disney Dream, and Disney Fantasy. But the Disney Wish will be the fifth ship, and it looks to be the most magical of them all.

“A castle is the centerpiece in our Parks, so it was really kind of obvious to us that we should give Disney Cruise Line our own castle on the seas,” Cabo said.

Weiss shared, “Everyone has their sort of own core belief of, ‘What does magic mean? What is my wish?’ And that’s what we tried to sort of capture in the design of the ship.”

Imagineers turned to the classic fairy tale of Cinderella when designing the Disney Wish. “A Dream is a Wish Your Heart Makes” was truly Cinderella‘s core motif, and that shines through in the new ship. This is explained in the video below:

Disney also shared the following details to give fans a bit more information about the magic and enchantment that is coming to the fifth ship in the Disney Cruise Line fleet:

The spellbinding Grand Hall — a bright, airy and elegant space that will welcome guests as they first step on board — is the truest embodiment of the enchantment motif. Its fairytale castle-inspired design is touched with Gothic, Baroque and French Rococo influences that will give life to the columns, carvings, trimmings and adornments.

The Grand Hall is Disney Cruise Line’s castle on the seas, an enchanted realm where glittering trails of pixie dust climb majestic three-story columns, spill across the ceiling and animate the shimmering chandelier above with an effusive burst of magic. The chandelier is the manifestation of wishes come true – a swirling spiral of crystal gems punctuated with light, its crown jewel a wondrous wishing star.

At the base of a grand staircase, beneath the glow of the wishing star, will stand the personification of wish fulfillment herself: Cinderella. A pillar of The Walt Disney Company’s legacy, Cinderella’s story is the epitome of magic transforming wishes into dreams and dreams into reality. The beautiful bronze statue of this beloved and kind princess is just one of many tributes to her story in the Grand Hall’s design – others include railings that glisten with elegant stained glass in her signature colors, rich carpeting embellished with icons from the film, and sophisticated nods to her carriage and glass slipper in the delicate metalwork and light fixtures.

The Grand Hall will be the enchanted gateway to everything that awaits on board the Disney Wish: fairytale worlds, heroic challenges, epicurean indulgences, thrilling adventures, galactic encounters, peaceful escapes and so much more.

In the video, we also get new looks at the design of the Disney Wish that we have never gotten before. Take a look:

The Disney Wish will take its maiden voyage in summer 2022. To get fans excited, Disney Parks Blog has also launched an all-new webpage called “Everything Disney Wish.” Click here to visit the official webpage now!

The “Everything Disney Wish” section is where you can find all things related to the new ship – from breathtaking videos and images to behind-the-scenes peeks from our Disney Cruise Line authors and more. The site just launched but it’s already filled with great stuff, including a glimpse at the latest milestone, a special video look at the Disney Wish and other stories we think you’ll enjoy.

Are you excited to sail on the Disney Wish one day? Have you ever been on a Disney Cruise Line vacation? Let us know in the comments!

Looking to book a Disney Cruise Line vacation, your dream Disney trip, so you can visit Disney’s private island, Castaway Cay? Well, when you wish upon a star, your dreams come true! The Authorized Disney Vacation Planners at Academy Travel can help you book the most magical trip ever on the Disney Dream, Disney Fantasy, Disney Magic, and Disney Wonder — or even the Disney Wish next year. Click here to get in touch and book the trip of a lifetime!

Comments Off on NEW LOOK: Disney’s “Castle on the Seas”