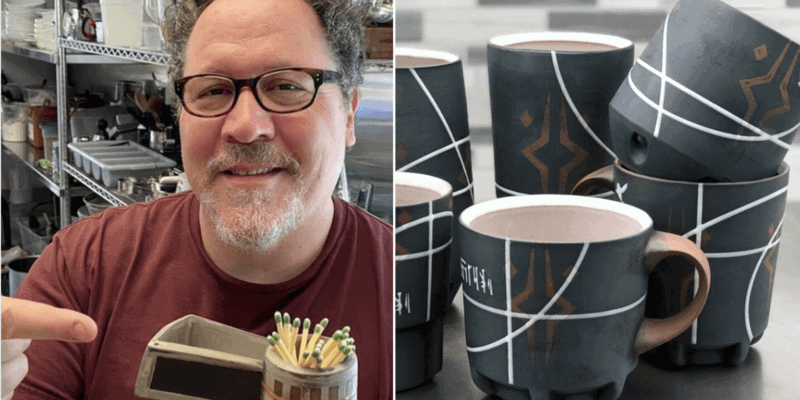 If you’re like most Star Wars fans, collecting memorabilia from a galaxy far, far away is probably one of your hobbies. And, if you’re anything like me, staying away from buying new Star Wars mugs is tantamount to stopping the explosion of the first Death Star.

Fortunately for those of you who have money burning a hole in your pocket (or your Venmo account), we’ve found the coolest Star Wars mugs this side of the Mos Eisley cantina. Crafted by Heerspink Ceramics, these amazing ceramic mugs are one-of-a-kind — and, each release is themed after a different Star Wars character or vehicle.

This month’s pre-order, which goes through April 21, features the legendary Togruta, Ahsoka Tano. Tano first became a fan-favorite as Anakin Skywalker’s Padawan in the animated series Star Wars: The Clone Wars. Then, she went on to make her live-action debut in Jon Favreau and Dave Filoni’s The Mandalorian.

Rosario Dawson played the character and will return in Mandalorian spinoff Ahsoka sometime in 2022. The series — which will interconnect with The Mandalorian Season 3 and Rangers of the New Republic — is likely to feature both Grand Admiral Thrawn and Ezra Bridger in live-action for the first time.

If you want to get your hands on an incredible Ahsoka Tano mug before The Mandalorian saga continues, we’ve got all the details you need. Eric Heerspink, the talented artist behind Heerspink Ceramics, shared details about his process with Inside the Magic.

“Each piece is created by hand in my studio. I use a combination of slip casting, wheel throwing and hand-building techniques to form each piece.

Each piece starts out as liquid clay (Slip) which is poured into plaster molds. The mold is the negative of the cup being made. These molds are made using prototypes that I threw using the potters wheel. As the slip sits in the mold the plaster slowly removed the water starting from what is touching the plaster and moving in.

Over time a wall is created. Once the wall has become the proper thickness, I then pour out the remaining slip out leaving a positive of the cup behind within the mold. After a period of time the clay has dried and shrunk enough to separate from the mold and begin finalizing the form. After the piece has been removed from the mold I then trim the lip and clean up the piece using the potters wheel.

The last step is to attach and pull the handle. Finally, I make sure to clean up any marks on the cup and handle and ensure that the cup is comfortable to hold and use. It is then put aside to dry.”

Eric continued, sharing details about how he brings Star Wars themes to life for each mug line he creates:

“In decorating my pieces I use a combination of materials to create the patterns and lines that are unique to my work. To achieve the surface each piece goes through multiple steps.

The first is to apply the pattern to the piece. I create my patterns using various design programs and then cut them using a vinyl cutter. This creates in essence a sheet of “stickers” that I apply to the piece to create the different patterns you see on my work. Each pattern is taken from within the Star Wars universe, such as the lights within the Death Star corridors. After the vinyl pattern is applied I then brush a colored slip onto the piece.

After it has dried to the touch I remove the vinyl leaving the clay exposed in the created pattern. At this point the piece is placed in the kiln and fired for the first time to approximately 1900 degrees.”

The decorating process continues after each piece’s first firing. This attention to detail is what makes Eric’s work so impressive — and irresistible to anyone who loves collecting Star Wars coffee mugs. He shared with ITM:

“After the piece has gone through the first firing, I then begin my second round of decorating.

The first step is to pour a glaze into the inside of the piece. This ensured a fully functional piece that is water tight. From there a black wash is applied to the outside of the piece. I then wipe this wash off leaving some of the wash behind. This creates an aged look and adds subtle visual interest to the surface.

Next, the lines are taped and glazed. I use vinyl tape applied above and below to create a space that when glazed becomes the crisp line. Due to the overlapping nature of the lines, these are done one at a time.

The text and the signet — in the case of the Ahsoka mugs, the Morai [a recent Boba Fett mug series featured the Mandalorian mythosaur, below] — are cut, once again using the vinyl cutter, and applied to the piece. I then apply glaze over the vinyl to create the delicate text and sigil in glaze.”

Finally, Eric gave us some insight into the evolution of his work and how he moved from being inspired by Star Wars vehicles to taking inspiration from some of the coolest characters in a galaxy far, far away. On Heerspink Ceramics’s social media channels [links at the end of this article], you can find previous coffee mug collections, including mugs inspired by Princess Leia Organa and Imperial stormtroopers.

“When I started creating this work I was really interested in the design of the sets and the vehicles. Due to this the work was more generic in its coloring and patterning.

The patterns were drawn from the patterns or shapes within the sets or of those that appeared on vehicles. However, as the work has evolved I have really begun looking at the character designs.

When I create a new character themed piece I am looking at the patterns/shapes and colors that define that character. I typically ask what visually makes that character unique within the Star Wars universe and how can that be employed within my work.

I enjoy creating work that reveals itself to the viewer over time. Rather than putting a portrait of the character on the piece, my work is somewhat more subtle about its inspirational origins.”

Even Mandalorian creator Jon Favreau can’t get enough of Heerspink’s work. In this post, Eric wrote:

I had the privilege of sharing my work with Jon Favreau @jonfavreau. As many of you know I’m a huge Star Wars fan and my ceramic work draws inspiration from the visuals of the movies and now The Mandalorian. So getting my work in to the hands of someone who has so inspired me is a great honor.

Are you going to place an order for a Heerspink Ceramics Star Wars mug?