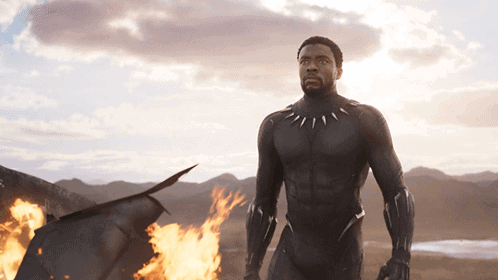 Last year saw the heartbreaking loss of Black Panther (2018) star, Chadwick Boseman. The Marvel actor died aged 43 after being diagnosed with colon cancer in 2016. Keeping his illness out of the public eye, Boseman fervently supported cancer charities until his untimely death. His legacy lives on in the swathes of fans he garnered from his mesmerizing role as Wakandan warrior, Black Panther, in the Marvel Cinematic Universe.

The critically acclaimed movie — based on the Marvel Comic character created by Stan Lee and Jack Kirby who first appeared in “Fantastic Four” in 1966 — premiered in Los Angeles and went on to dominate the box office, earning over $1.3 billion. Before becoming an Avenger, Boseman — who studied directing at Harvard University — also starred as baseball player Jackie Robinson in 42 (2013), as James Brown in the musical drama, Get On Up (2014) and as Thurgood Marshall in the legal biopic, Marshall (2017).

With Black Panther 2 already announced as part of the Phase 4  catalogue of Kevin Feige’s MCU, many Marvel fans wondered how director Ryan Coogler would adapt the sequel to reflect Boseman’s death, with questions over whether his leading role of T’Challa would be recast. The rumors were put to rest when Feige said that Boseman would not be replaced in Black Panther 2 at the end of last year — although some fans are, in fact, petitioning for Boseman’s leading role to be reprised by someone else.

As of now, nothing has been revealed about how the story of T’Challa will be put to rest and none of the cast have been confirmed, but we can presumably expect to see Danai Gurira, Letitia Wright, Lupita Nyong’o and Martin Freeman reprising their roles as Okoye, Shuri, Nakia and Everett K. Ross, respectively.

While Boseman has undoubtedly left a lasting imprint on the world, one artist has honored the late actor with a stunning piece of digital art that will be auctioned to raise money for the Colon Cancer Foundation. Andre Oshea, a 3D digital artist, has captured Boseman in his unique style with the NFT (Non-Fungible Token) artwork announced as being included in the Oscars six-figure “Everybody Wins” goodie bags that will be shared to the Academy Award nominees at the 2021 ceremony.

Oshea shared the work to his thousands of Twitter followers.

The way to immortalize an artist, is to honor them with art. I was tasked to create a tribute NFT for Chadwick Boseman for the Oscars! Bringing this piece to life has been one of my most challenging & rewarding experiences as an artist.

The way to immortalize an artist, is to honor them with art.

I was tasked to create a tribute NFT for Chadwick Boseman for the Oscars! Bringing this piece to life has been one of my most challenging & rewarding experiences as an artist.

The NFT art will then be auctioned on Rarible, where it will live from Sunday April 25, 2021 to Tuesday April 27, 2021. Boseman is the frontrunner to posthumously win the coveted Best Actor Oscar at the Academy Awards for his inspired turn as Levee in George C. Wolfe’s Ma Rainey’s Black Bottom (2020). The film — which also stars award-winning actress Viola Davis — was released after his death to critical acclaim. This awards season, Boseman has won the Lead Actor trophy for the Critic’s Choice Movie Awards, the Golden Globe Awards and the Screen Actors Guild Awards — all for his work on Ma Rainey’s Black Bottom.

You can take part in the auction of the stunning digital artwork here.

Per The Verge, NFT (Non-Fungible Token) is described as:

“Non-fungible” more or less means that it’s unique and can’t be replaced with something else. For example, a bitcoin is fungible — trade one for another bitcoin, and you’ll have exactly the same thing. A one-of-a-kind trading card, however, is non-fungible. If you traded it for a different card, you’d have something completely different.

Oshea said the following about the artwork:

The best way to immortalize an artist, is to honor them with art. Chadwick Boseman was a very special artist with the gift to unite people through joy, intention, authenticity & kindness. As an artist, I am honored to create this piece for Chadwick. His influence has touched me directly & his legacy will live in his art. He will have the opportunity to influence artists of every generation moving forward. My piece is about that growth as an artist — you need to take your time to build yourself & let your light lead the way. Chadwick, thank you for sharing your gift with the world.

However Marvel decides to handle the passing of actor Chadwick Boseman in the upcoming Black Panther sequel is sure to honor the actor’s incredible legacy. T’Challa first appeared in the MCU’s Captain America: Civil War (2016) as he hunted Sebastian Stan’s Bucky Barnes/Winter Soldier before teaming up with Robert Downey Jr’s Tony Stark / Iron Man to take on Captain America’s assembled group of superheroes. With The Falcon and the Winter Soldier concluded and a new Captain America having taken up the mantle, it will be interesting to see how Marvel adapt their Phase 4 plans to accommodate the tragic loss of Boseman who has, for sure, left a huge hole in the MCU legacy.

At this time there is also a Wakanda Disney+ series in the works. You can catch the late Chadwick Boseman in the MCU on Disney+ and in the award nominated, Ma Rainey’s Black Bottom, on Netflix.

What do you think will happen in Black Panther 2?