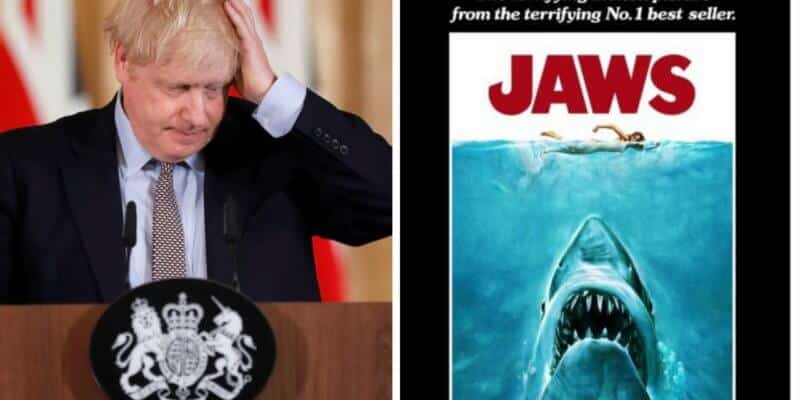 There are many films that viewers will reference for the rest of their lives. Typically, movies like this are classics that almost anyone would recognize, such as Jaws. It seems that the Prime Minister of the U.K., Boris Johnson, has a particular fondness toward Jaws, as he has repeatedly referenced it — and even compared himself to the mayor of Amity in the movie.

When a killer shark unleashes chaos on a beach community, it’s up to a local sheriff, a marine biologist, and an old seafarer to hunt the beast down.

After reading this, you may think, how in the world could a movie about a bloodthirsty shark relate to politics? Well, according to the Independent, the ongoing pandemic has somehow brought one political leader to compare himself and his actions to those of Larry Vaughn, the mayor in Jaws:

Mr Johnson is said to have expressed regret over the first lockdown and likened himself to Larry Vaughn, the mayor of Amity in Jaws who orders the beaches to stay open despite the shark attacks.

Johnson has said of the Amity mayor’s actions in comparing them to recent lockdowns:

“A gigantic fish is eating all your constituents and he decides to keep the beaches open. OK, in that instance he was actually wrong. But in principle, we need more politicians like the mayor – we are often the only obstacle against all the nonsense which is really a massive conspiracy against the taxpayer.”

If we consider Jaws and the film’s plot, specifically as it related to Larry Vaughn, the mayor behaves quite recklessly, not believing that the threat of Bruce the Great White Shark was real, and allowing his town’s beaches to remain open to stimulate the town’s economy rather than closing them to protect the citizens of Amity.

As you may guess, comparing that situation to that of the pandemic — considering how it has impacted the world — and the lockdowns that have taken place was not well received, and Boris has received lots of negative comments regarding his words.

Interestingly enough, this is not the first time the Prime Minister has referenced Jaws politically.

In 2006, as he was preparing to run for mayor of London for the first time, Mr Johnson said in a speech Mr Vaughn was the “real hero” of Jaws.

From this, we can gather that Mr. Johnson seemingly idolizes the fictional character of Vaughn and admires the way he governed his town during the tragic events that occur within the movie. Considering the Jaws photo op has returned to Universal Studios Florida, perhaps Johnson should pay a visit to the theme park to snap a photo with the statue.

What do you think of Boris Johnson’s reference to Jaws?

Comments Off on U.K. Prime Minister Compares Himself to ‘Jaws’ Character