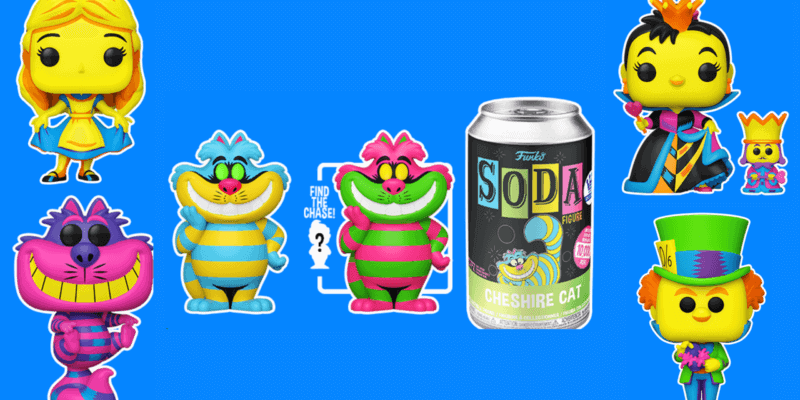 You could be excused for wondering how Funko could possibly top some of its older Alice in Wonderland Funko POPs that have been released in the past. There have been all sorts of Funko versions of the numerous characters from Wonderland in the past, but it seems that this new collection is taking things to an entirely new level.

As you can see, there are new variants of Alice, The Mad Hatter, The Cheshire Cat, The Queen of Hearts and The King of Hearts. What’s interesting is that these are from the live-action Tim Burton Alice in Wonderland (2010) movie and not the Disney animated classic. That’s not all, though, the new collection features posters and collectable figures within soda cans. Take a look at the new Alice in Wonderland posters below:

Here’s a better look at what to expect from the figures in the soda cans, including a look at the rare chasers:

As you can see, there are variants straight from the 1951 animated classic and two variants of Alice, The Queen of Hearts, The Mat Hatter and the Cheshire Cat.

Finally, there is a series of T-shirts that are being released as part of the collection:

We love the effect of the blacklight design on this entire Alice in Wonderland Funko collection! If you’re wondering how and when you can get your hands on this new collection, they are all going to be exclusive to Funko.com and are set to be released later this spring. As soon as we see product listings, we will share them with you!

If you love Disney Funko POPs, then check out some other recent releases:

Let us know what you think of the new Disney’s Alice in Wonderland Black light Funko POP series in the comments below!