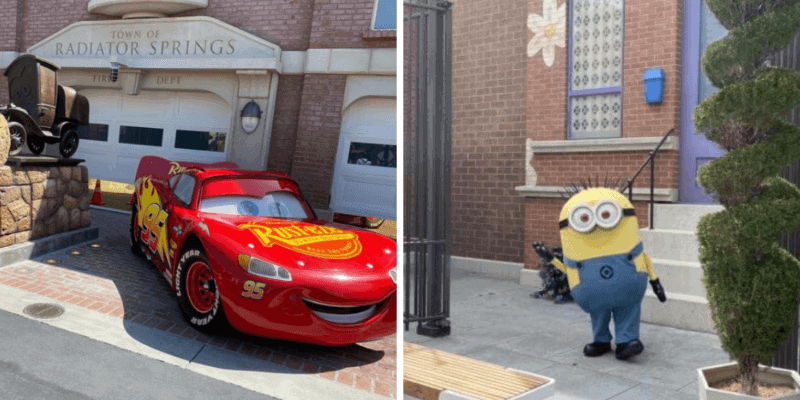 Shortly after Disneyland announced their new hard-ticketed experience, A Touch of Disney, Universal Studios Hollywood announced that they were also giving Guests a food experience before the park officially opened called Taste of Universal.  Taste of Universal opened a week before A Touch of Disney and offers Guests a chance to go back to Hogsmeade and Springfield and taste some of the park favorites that they have been missing.

With both Disneyland and Universal offering their Guests a new experience before they are able to fully open, let’s take a look at some differences between the two!

For Guests who want to head down to Anaheim and experience A Touch of Disney, a ticket will cost them $75.  This includes parking in the Mickey & Friends parking structure as well as a $25 Disney Dining Card that can be used on any food items in the park, except alcohol. The event runs Thursdays through Mondays and costs the same no matter which day you attend.

Unlike A Touch of Disney, Taste of Universal tickets do not have a flat rate.  Guests wanting to attend on a Thursday or Friday will pay $44 plus tax.  Sunday tickets are the next price point at $49 plus tax and the most expensive tickets are for Saturdays, which come in at $54 plus tax. Children age 3-9 will pay a flat ticket rate of $25 plus tax.

Each adult ticket includes a choice of 5 items from the Taste of Universal menu and each child’s ticket includes 3 items. Universal Annual Passholders are able to get tickets at a discounted rate. Additionally, parking is free for the event.

For A Touch of Disney, Disneyland Resort has combined elements of their traditional Food & Wine Festival with some of their most popular theme park offerings.  There are six food booths set up throughout California Adventure where Guests can purchase tasting-size dishes ranging from a Beef Tenderloin Slider and Pork Belly Banh Mi to Impossible Cheeseburger Mac and Cheese.  Some delicious drinks include Farmstand Punch and chug-worthy Strawberry Rose Lemonade.  Various California wines and beers can also be found at booths throughout the park.

Also available to Guests are traditional park favorites that they have been missing for a year.  Guests can head over to Adorable Snowman Frosted Treats and purchase a Dole Whip, which they can buy in a cup or swirled in a lemon soft-serve cone.  At Smokejumpers Grill, Guests can treat themselves to a half-size Monte Cristo sandwich, complete with berry compote.  If park goers want to venture to the D-Lish food booth, they can choose between two Disney classics.  First is the ever-popular Walt’s Chili.  Their second choice is an always adorable Mickey Waffle with macerated berries and whipped cream.

Taste of Universal does not offer any food booths like Disney.  Universal has opened most of their Upper Lot restaurants and guests are able to purchase full-size menu items.  These include items like Shepherd’s Pie and Sticky Toffee Pudding from the Harry Potter-themed restaurant, The Three Broomsticks, to full-size Krusty Burgers and Loaded Tots from the Minion Café.

While Guests may like the fact that the portions are full size, unlike the Touch of Disney items, they may find it difficult to find the space to fit five full potions of food in one day.  Luckily, Universal also includes drinks like the delicious Butterbeer and prepackaged items like Cereal Treat Bars and giant Lard Lad donuts as part of the five item options.

In order to keep in line with the current pandemic-era regulations, traditional character meet and greets are unavailable at both Disneyland Resort and Universal Studios Hollywood during these events.  While both parks are giving Guests socially distant selfie and character experiences, Disneyland has definitely come out on top.

Multiple characters could be found waving to guests and interacting with them at A Touch of Disney at Disney California Adventure, ranging from Lightning McQueen and Mater in Cars Land to Goofy and Max fishing by Pixar Pier.  There were also numerous selfie locations with characters and fun backdrops.

At Taste of Universal, Guests could make their way into Springfield and find Homer Simpson at his traditional spot at the Kwik-E-Mart.  Donkey from Shrek could also be found next to the Kung Fu Panda theater talking to Guests and taking numerous photos.  While it is noted that Minions can be found by the Despicable Me: Minion Mayhem ride, we only caught them on our first visit to the park, and not on our second.

Both Disneyland Resort and Universal Studios Hollywood are following health and safety protocols for the wellbeing of Guests and employees.  You can find social distancing markers, as well as signage to promote the wearing of face masks and social distancing. However, Disney seems to be slightly stricter when it comes to Guest behavior.

As Guests wait to enter California Adventure Park, there are Cast Members to direct them to which line to wait in and make sure that social distancing is maintained.  Guests are also directed to approach the turnstiles one group at a time.

Universal Hollywood also has social distancing markers on the ground for Guests as they wait to go through security and the metal detectors.  However, in an attempt to move the Guests through security quickly, we noticed that one group was encouraged to go through the metal detector immediately after the group in front of them, even when that group was still standing there waiting for their bags to come through the x-ray machine.

At Touch of Disney, Guests are highly encouraged to order food through Mobile Ordering via the Disneyland app.  Guests select a pickup time for their food, let the location know when they are there, and wait in a socially distanced line to pick up their food.  Tables are spread throughout the park where guests can safely take off their masks and eat.

While Universal also had their lines and seating socially distanced, there is no way to mobile order, so all Guests must wait in line.  This also becomes a problem as Universal employees try to move Guests quickly.  While the group in front of you may have to wait to have their food handed to them, you are asked to approach the counter to order your food, putting you close to the party in front of you.

Overall, based on our experience, we found that both Disneyland and Universal Studios worked incredibly hard to make sure that Guests had the safest and best experience possible!

Have you been to both A Touch of Disney and Taste of Universal?  Which one did you prefer?  Let us know in the comments below!