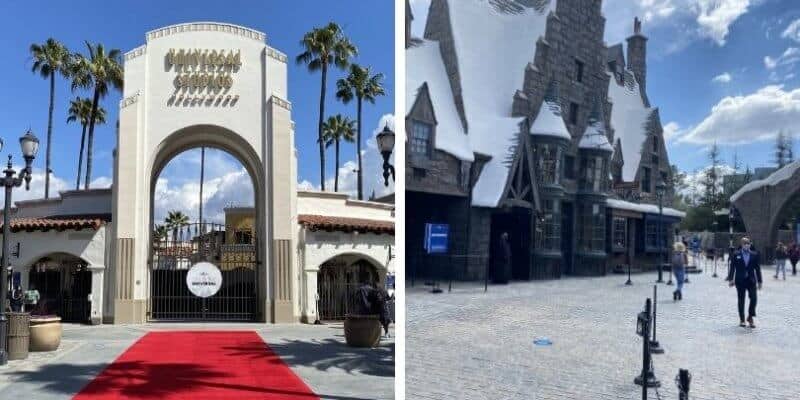 Both Images Credit: Bailee A. Inside the Magic

Universal Studios Hollywood has remain closed due to the ongoing pandemic for an entire year now. However, Universal is bringing some theme park fun to visitors thanks to a dining event called, Taste of Universal. The event starts today, March 3, and runs on select weekends through April.

We are on the scene on the first day of  Taste of Universal to get a feel for what this exciting new event offers. Despite the event being sold out for the first weekend, it has opened to pleasantly low crowds.

Related: Get a Guy Fieri Burger Delivered From Universal Hollywood!

Our reporter arrived about a half-hour before Taste of Universal officially started, thinking that the lines to park and check-in were going to be lengthy, however, thankfully she encountered no wait!

With Taste of Universal being centered around food, we expect that more Guests will arrive later this afternoon and possibly even closer to dinner time. Right off the bat, the event comes off as a very relaxed and well-organized introduction back into Universal Studios Hollywood for fans who missed the theme park.

Here is a photo of the Universal Globe, just before the event started. You can see how there are hardly any Guests waiting.

Once inside of the park you will see signs that denote the designated dining areas. Universal has done a great job of adding helpful signage all over the park for this event.

For example, the brand-new Minion’s Cafe is being used as a designated dining area!

The crowds seem very low which makes for a great low-key event for those looking for good food, fresh air, and a fun atmosphere.

Here is a look at the entrance, and safety signage that can be found in Hogsmeade.

Universal has set up a designated dining area in Hogsmeade that offers a perfect view of Hogwarts castle! As you can see from the photos the outdoor dining areas offer tables that are placed six feet or more apart. offering a safe place to enjoy your meal outdoors!

This is the least crowded we have ever seen Hodgsmeade as this land, in particular, is known for being particularly tight and popular amongst fans.

With Taste of Universal being so laid back and offering many dining options, we highly recommend you visit if you are in the L.A area and if, of course, you feel safe to do so. Please keep in mind if you plan to visit, to follow all of the safety guidelines put in place.

Taste of Universal is just the start of the full reopening of Universal Studios Hollywood. The theme park is gearing up to reopen in earnest as guidelines in the state of California have been lessened. Now, theme parks in California can open at 15% capacity once their county reaches tier 2. At this time, we are still waiting for more confirmation from Universal on exactly when they plan to open and what their guidelines will be.

Universal recently emailed their Pass Members getting them excited for not only  Taste of Universal but also the reopening of Universal Studios Hollywood.

If you are interested in attending  Taste of Universal you can purchase tickets here!

Are you going to attend Taste of Universal? Let us know in the comments!