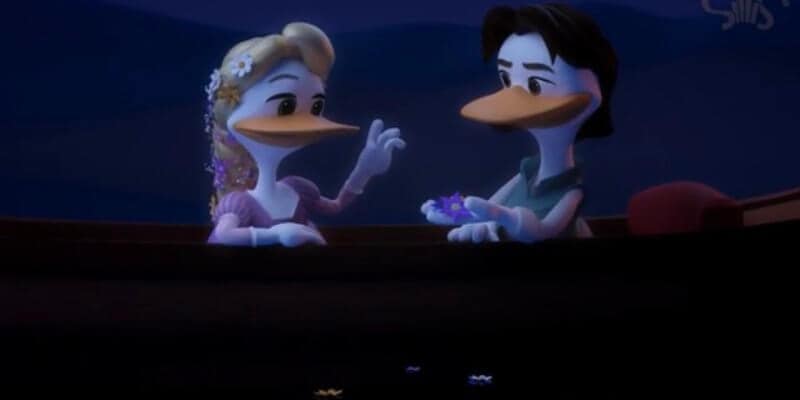 Have you ever found listening to some of your favorite Disney songs and wondered “What would it sound like if Donald Duck sang this song?” Well, wonder no more!

YouTuber SilliS has given Disney fans something they never knew that they needed and now cannot live without.

On March 17, the Youtuber posted a parody music video of the Tangled song “I See The Light”, originally sung by the film’s two stars, Mandy Moore and Zachary Levi. However, in a unique twist, he took the song and reimagined it with two animated ducks!

These ducks sound like Donald and Daisy Duck but look just like Rapunzel and Flynn Rider (if they had white feathers and bills).

The entire video has been altered with floating duck lanterns and a small rubber duck placed in the boat that Flynn steers in order for Rapunzel to see the lights that she has been desperately dreaming of.

There is no shortage of great Disney parodies to be found on the internet, and this video is no exception. Since it was posted on March 17, it’s already racked up over 100,000 views and is sure to get thousands more. A combination of singing ducks and Disney? Who can resist?!

You can check out the full YouTube video here:

For those who can’t resist Disney songs with ducks, a video of the DuckTales theme song with real ducks (and adorable little baby ducks!) has been making the rounds on YouTube since 2014. You can check it out here.

Tangled was released in 2010 and instantly became a Disney classic. Between men with hooks and scars singing about their dreams of being concert pianists and mimes along with the love-to-hate Mother Gothel, fans can’t get enough of this Disney animated film.

In fact, they have been so enthusiastic that Disney built a Tangled-themed rest area in Disney World’s Magic Kingdom and recently confirmed a Tangled area will reside in Fantasy Springs in Tokyo DisneySea.

What’s a Disney parody that you just can’t get enough of?  Let us know in the comments below!