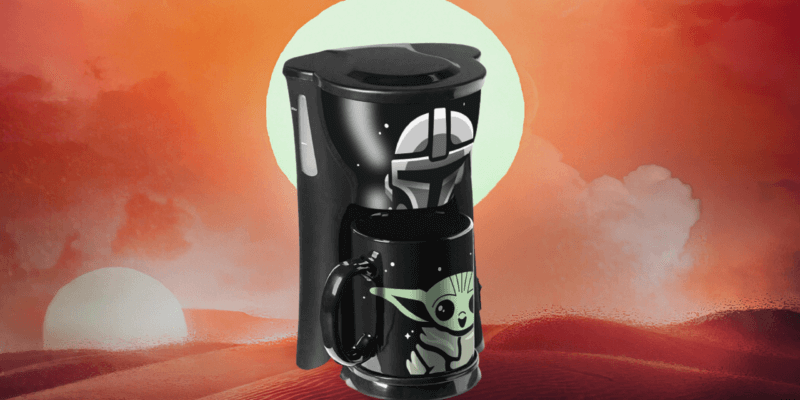 A new coffee maker that you can find on Her Universe combines everything that you need to start the day, Star Wars and coffee!

You can purchase this new coffee maker directly from Her Universe for $20.93, but you’re going to want to act fast because, as with all merchandise from The Mandalorian, it will almost certainly sell out quickly. The full product description reads:

The Mandalorian Single Cup Coffee Maker with Mug goes where no coffeemaker has gone before, brewing hotter, faster and better tasting coffee than most machines out there. It utilizes the simplicity of ground coffee and brews a customizable cup quickly, an 8 oz cup in less than 90 seconds or a 14 oz travel mug in under 2.5 minutes.

It’s no surprise to see Her Universe feature Star Wars merchandise. Ashley Eckstein (who founded Her Universe) is best known as the voice of Ahsoka Tano throughout two animated television shows — Star Wars: The Clone Wars and Star Wars Rebels.

We absolutely love what Eckstein has done for fashion, especially for those who are fans of sci-fi and fantasy fandoms. She’s done an especially good job at expanding what’s available to girls and women, which prior to Her Universe, was largely limited to the same t-shirts that were available to men.

A reminder for fans of The Mandalorian — Season 3 is in the works, but it looks like we’re going to have to wait until 2022 before we see Djarin and the rest of the gang again. Lucasfilm is, however, being kind enough to tide us over with a Boba Fett story in The Book of Boba Fett, arriving in December 2021.

Let us know in the comments below if you’re going to be grabbing the new Mandalorian coffee maker!