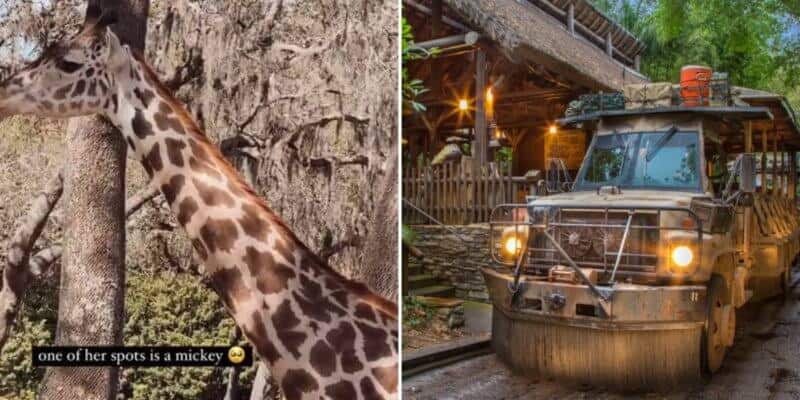 If you have been to any Disney park across the globe, you likely have seen hidden Mickey’s scattered throughout Disney parks and resorts. From Disneyland to Animal Kingdom and beyond there are hidden Mickey’s everywhere you turn!

Some Disney fans have even gone as far as to create books one where to locate a majority of hidden Mickey’s, but there are so many around that it is easy to miss one if you blink at the wrong moment, or if you’re not paying attention to them. In my opinion, hidden Mickey’s are one of the magical things Disney has to offer, and it’s a free Disney activity that you can rarely complete! For example, Mickey and Minnie’s Runaway Railway in Disney’s Hollywood Studios over in Disney World has hundreds of hidden Mickey’s on that attraction alone.

That being said, it is one thing when Imagineer’s create their own hidden Mickey’s, but another thing entirely when living animals who reside as Disney possess them. At Disney’s Animal Kingdom in Disney World, Kilimanjaro Safaris takes Guests on their own personal guided safari where they can get up close and personal with all the animals around.

It seems that when Guest Emily (@emilynels8 on Instagram) went on the attraction, the Kilimanjaro Safaris driver shared that a certain giraffe’s spots were shaped in the perfect hidden Mickey! We have circled the hidden Mickey in the screenshot below:

When we see fun sights such as this ironic hidden Mickey, it really does allow all of us Guests and Disney lovers to feel that there really is magic pulsing throughout the park. Many giraffes are actually born at Animal Kingdom, so it is amazing to think that there is a chance that this one was possibly born with the stamp of approval from the mouse himself!

If you ever want to go on a hidden Mickey hunt, but you don’t know where to start, I always like to tell people about Disney’s Wilderness Lodge Resort! If you go to the Guests Services desk and ask a Cast Member for the hidden Mickey checklist, you will receive a scavenger hunt full of clues that will have you bouncing around the resort trying to find every Mickey Mouse. It is a free, fun, and unique activity that all ages could enjoy.

What is your favorite hidden Mickey to spot?

If you are a Diseny fan who wants to go on a hidden Mickey Mouse hunt at Magic Kingdom, EPCOT, Disney’s Hollywood Studios, or Animal Kingdom, you need to book a Disney vacation today! Click here and start counting those Mickey’s today!

Comments Off on Even the Giraffes at Disney Have Hidden Mickeys!