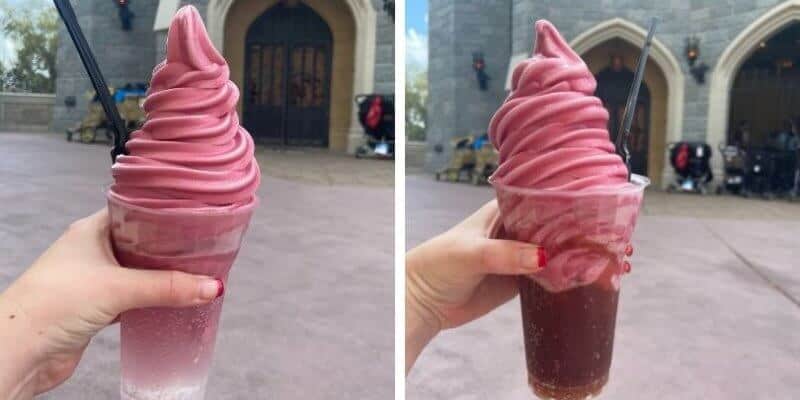 Both Images: Credit Inside the Magic Kelly C.

Walt Disney World is filled with must-try treats including Dole Whips, Mickey pretzels, churros, and more — The theme parks and Resorts have so many options to choose from.

But, one of the top snacks for Disney Parks Guests is the unique and fun ice cream offerings that Disney World has available. There have been plenty of soft-serve desserts in the past, including the Poor Unfortunate Soul Float, the Firecracker Float, the Kakamora Float and more.

And now, thanks to a recent visit to Magic Kingdom, we have discovered Disney has brought back one of the most popular flavors to the menu!

Storybook Treats in Magic Kingdom at Walt Disney World has recently brought back one of its most popular soft-serve flavors to date — Cherry! This flavor is a favorite to many as they really enjoy the refreshing flavor, especially on a hot day.

Storybook Treats also offers Light Lemonade as a fountain beverage and though we did not try this combination, cherry lemonade does sound refreshing. However, with that being said it could be a bit on the sweeter side. If you are feeling daring, give it a try and let us know what you think!

Other Floats At Disney World

If you want to visit Disney World on your next family vacation, get started planning today!

Which is your favorite float at Disney World? Let us know in the comments below.