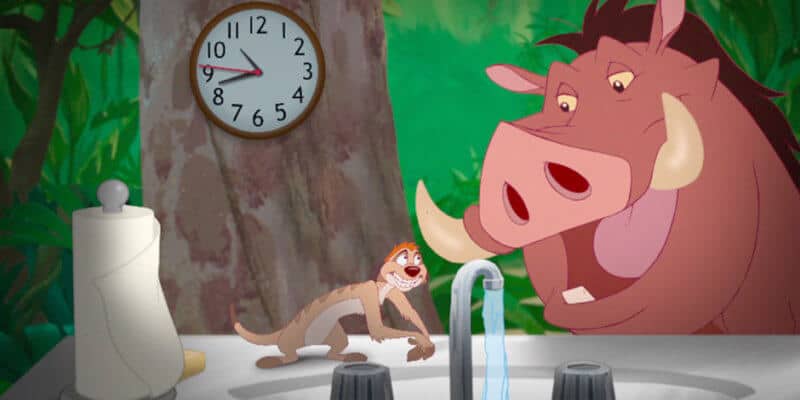 We are over a year into the COVID-19 pandemic and most of us probably have our hand-washing routines down pat.  However, if singing the ABCs is getting a little old, we have a magical solution for you!  Disney has dozens — strike that — hundreds of songs, many of which Disney fans know by heart.

“You’ve Got A Friend In Me”

The Toy Story franchise has been around since 1995.  In the first film in the series, fans were introduced to Randy Newman’s hit song, “You’ve Got a Friend in Me”.  The intro to this song covers just over 20 seconds and is fun to bop along to while sudsing up!  The lyrics you need to sing while you wash are below:

“Part of Your World”

The Little Mermaid (1989) is a Disney classic that has more than one catchy song, but Ariel’s ballad about wanting to be a human may rank close to the top.  Sing the lines below to make your hand-washing time fly by:

Also from the iconic animated The Little Mermaid movie is Ursula’s standout song, “Poor Unfortunate Souls”. Ursula is one of the most popular Disney Villains, voiced by the incomparable Pat Carroll in the original film. Sing the following lines to add sinister flair to your hand-washing routine:

Beauty and the Beast (1991) seems to only grow in popularity year after year.  Disney World even recreated the Beast’s Castle as a new dining location.  The movie also includes one of Alan Menken’s all-time most popular songs, “Be Our Guest”. So, feel free to be our guest and sing along with the words below every time you wash your hands.

Be our guest! Be our guest!
Put our service to the test
Tie your napkin ’round your neck, cherie
And we’ll provide the rest
Soup du jour
Hot hors d’oeuvres
Why, we only live to serve
Try the grey stuff
It’s delicious
Don’t believe me? Ask the dishes!

From the moment The Lion King (1994) hit theaters, fans fell in love with Simba, Pumbaa, Timon, and the rest of the classic characters from the Walt Disney Animation Studios classic. Who doesn’t love the bonding song between a lion, a meerkat, and a warthog?  We sure do!  “Hakuna Matata” is such a fun song, you can’t help but sing along:

Moana is one of the more recent films on this list, but it has definitely skyrocketed in popularity since its 2016 release.  The tropical film has become a Disney staple and a new Moana float is part of Disneyland Resort’s Magic Happens parade.  There are even Moana-themed rooms coming to Walt Disney World Resort’s Polynesian Village Resort! You don’t need to be sailing the ocean to sing along to the lyrics below while you wash your hands:

See the line where the sky meets the sea?
It calls me
And no one knows
How far it goes
If the wind in my sail on the sea stays behind me
One day I’ll know
If I go, there’s just no telling how far I’ll go

Easily one of the most popular Disney songs of all-time, we had to include “Let It Go” from Disney’s Frozen (2013) on the list.  One of the ultimate empowerment songs, “Let It Go” is one tune that people will just not let go of.  If you are one of the few people who managed to escape the song, the lyrics are below:

We hope that you enjoy singing these Disney songs as much as we do and be sure to wash your hands! Which song on this list is your favorite?

Comments Off on Tired of the ABCs? Here Are Fun Disney Hand-Washing Songs!