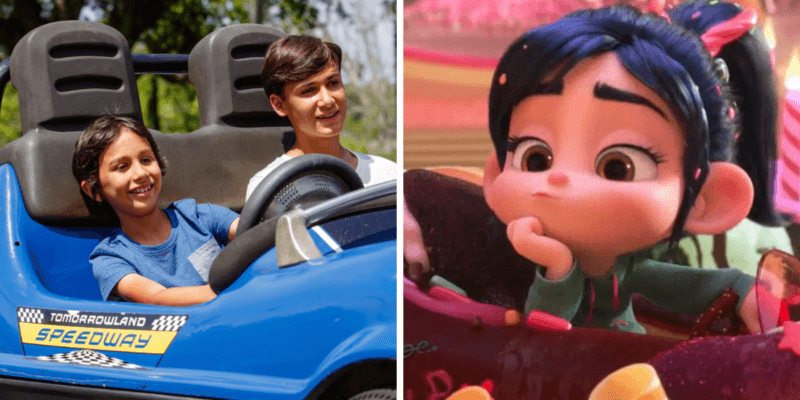 The aging Tomorrowland Speedway at Magic Kingdom (we’re going to focus on the East coast, here, not Autopia) is in desperate need of an update. The stinky, fuming cars are an offense to both this reporter’s nose and likely, the environment when Guests pass by the Tomorrowland attraction into the forest of Fantasyland.

When the attraction shut down briefly to allow for the Tron coaster construction, I thought it was going to be replaced, but sadly for me, it reopened with no changes. In my opinion, the next time the Tomorrowland Speedway is closed, it should be torn out and replaced with a Sugar Rush Raceway from Wreck-It Ralph!

Walt Disney once said, “Tomorrow is a heck of a thing to keep up with.” Isn’t that the truest statement? While Tomorrowland has seen its fair share of updates, reinventions, and additions, it’s still one of the most beloved lands in all of Magic Kingdom. That “promise of the future” and expectation of adventure and invention is always at the forefront of our minds when we traipse through the land, listening to that essential “Tomorrowland Loop” music.

But when I look at (or smell…) the Tomorrowland Speedway, it seems old. Outdated. No longer unique. The thrill of a futuristic mini motorway has been duplicated by nearly every mini-golf course in the country and perfected with speed by companies like Andretti Karting.

This unfortunate situation, however, opens the “doors of tomorrow” by allowing Disney to upgrade the idea of futuristic driving with a re-imagining of the Tomorrowland Speedway. The digital world is here to stay, and integrating what Walt could never have expected with his original race car idea is at last, opportunistic.

Creating an overlay of Sugar Rush Raceway onto the Tomorrowland Speedway retains Disney’s vision of a family attraction where “smaller racers” can still take the wheel, but integrates a digital, computerized land of the future by importing racers into a video game racetrack. What’s more futuristic than that?

I first had this idea in 2017 when on a training trip for the Disney Parks Moms Panel, now planDisney, while on the Tomorrowland Transit Authority’s PeopleMover. Listening to the futuristic ideas promoted in the “land of tomorrow” while on the PeopleMover just underscored how old and outdated the ride actually is. Other Disney Guests have also thought that re-theming the car attraction is necessary to keep up with the future while others want the entire thing ripped out and replaced. What I propose by integrating Sugar Rush is a smoother, (literally) cleaner ride with tons of family fun.

Picture yourself in the queue for Sugar Rush. Perhaps the entrance tips its hat to Litwak’s arcade, and you enter the game console. The Kart Bakery options shift on interactive screens on the walls. Racers and avatars are advertised overhead as you “chews” your racer. Digital sounds and scans (similar to those found in Flight of Passage) slowly transform you into a video game character as you approach the start with the other racers. You are assigned a kart with help from a Sugar Rush Cast Member.

Colorful electric karts (note the futuristic technology!) plastered with candies, Twizzlers, and un-meltable chocolates line up at the starting line, colorfully recreated from Wreck-It Ralph with care from Imagineers. You grab the cookie steering wheel and take off with the fruit roll-up checkered flag, waving. Audio overhead encourages you to traverse the candied course with peppermint trees, cherry bombs, chocolate lakes, and the looming cola mountain in the distance.

Candied stands of Taffyta’s hearts and adorable bonbon animatronics bob alongside the course, as cheers emanate from the boxes. You race around a curve (still on your center track, but perhaps at a bit more than the standard 7 mph) towards King Candy, who has wrecked on the side of the course. Sour Bill attempts to help him right his Kart as you glitch in your vehicle and speed ahead.

Perhaps as you near the halfway mark of the course, you enter a racing tunnel where the Cy-Bugs invade from the neighboring Tron attraction, creating havoc as they consume candies and turn into the more dangerous sugar bugs. One flies overhead, and many crawl under the bridge overpass. Exiting the tunnel, cola mountain starts to spurt and light up from the dropping Mentos. Is that Ralph on top, buying you time to get to the finish line? It’s up to you to get to that zoom across the finish line and reset the game!

The checkered pink and graham finish line are ahead! Cramming the gas pedal to the floor, you and your tiny driver make it! The game audio tells you that the game has successfully reset, and perhaps your driver is revealed as the royal head of the game! The candy stands alongside cheer as you make your way across the winner’s bridge to Victory Circle (perhaps you see your high score initials on the screen, MagicBand style) and line up your quarter for the next game. What a race!

Can you picture yourself and your kids not only driving themselves around the course but immersed in a colorful candy land with the task ahead to reset the game? Adding an element of storytelling to Walt’s original idea of tiny tots being able to drive cars celebrates the coming future but also the past.

What do you think about this possible overlay and updating of Tomorrowland Speedway? Would you welcome Sugar Rush Raceway to Tomorrowland? Leave us a comment!