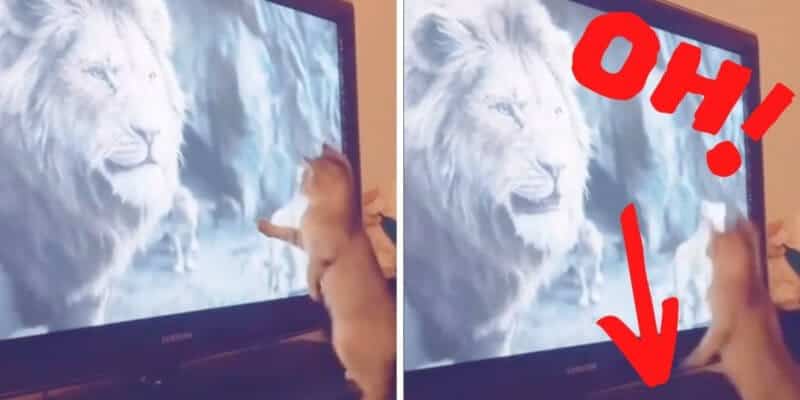 All images credited to Scott Rezende

We all know that cats an extremely cute yet peculiar little fluff balls. They often have some odd behavior that is very strange and puzzling to their human guardians. One of the several peculiarities cats have is that of being fascinated by TV screens.

In a previous ITM article, we showed a kitten obsessed with watching the Disney animation Aristocats. This time, another fluff feline was filmed on camera watching TV, yet things didn’t really go as planned for poor little Bruce.

Bruce is a six-month-old orange tabby cat that was filmed by his owner Scott Rezende while watching Disney’s live-action The Lion King movie. During the video, Bruce was on his hind legs while watching the movie very close to the TV screen.

The kitty is clearly in a trance with the movie with one of his paws resting on the screen during the scene that Simba comes back to his pride and confronts his uncle, and nemesis, Scar.

The female lion’s roar at Scar and Simba follows with the line: “The choice is yours, Scar.” During that specific moment, poor little Bruce gets spooked and tries to get away from the TV screen. That is when things go south for the poor furry baby, but it made for a hilarious moment.

In an attempt to leap away from the TV, Bruce ends up slipping and falling off the TV unit.

During an interview with the Dailymail, Bruce’s owner Scoot Rezende explained how the little curious kitten ended up becoming a part of their family.

“I was cleaning one day and had the back door open when Bruce walked into the kitchen. He decided it was his forever home and never left.”

He also explained that Bruce is extremely curious and a little jumpy at new things. And if you are wondering, yes, Bruce is well and was unharmed.

Poor baby Bruce! What did you think of the video? Was it funny, or you were just sorry for the kitten? Let us know in the comment below.