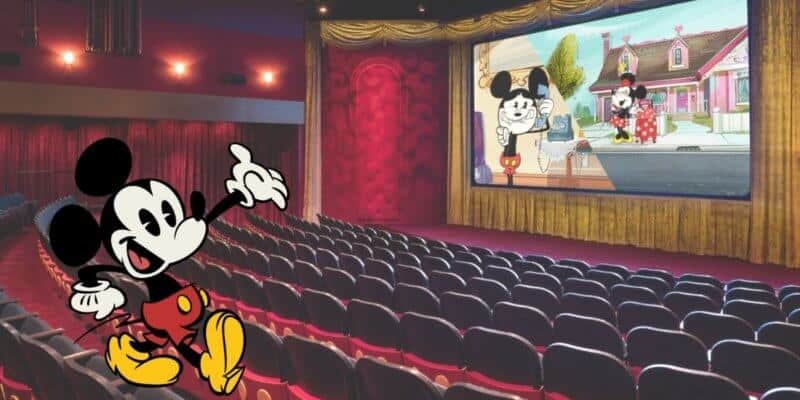 Many of us grew up with Mickey Mouse cartoons in one form or another. Whether it be with the older and classic cartoons such as “The Gallopin’ Gaucho” or “Plane Crazy” or the newer cartoons including “Potatoland”, Mickey Mouse shorts are a staple in so many of our lives.

Speaking of the new Mickey Mouse cartoons, which are part of the Mickey Mouse television series which first debuted in 2013 with the episode titled “Croissant de Triomphe”, they are becoming more and more popular! Ever since, they have become a staple and favorite for so many Disney fans around the world. From “Flipperboobootosis” to “The Adorable Couple”, and of course, “Potatoland”, the Mickey Mouse series has brought us five incredible seasons as well as a spin-off series titled The Wonderful World of Mickey Mouse, now streaming on Disney+.

Well, if you are a fan of these new cartoons, you are going to want to head over to Disney’s Hollywood Studios at Walt Disney World and check out the Mickey Shorts Theater — located right next to the new theme park attraction, Mickey and Minnie’s Runaway Railway.

Right after you finish your experience of stepping into the world of Mickey cartoons on Mickey and Minnie’s Runaway Railway, continue your adventure over at the Mickey Shorts Theater, which is welcoming Guests for a special showing of the latest Mickey cartoon titled “Vacation Fun”.

Want to book a trip to Disney World? Get started today!

Once you step inside, you will notice that the chairs are designed to look just like Mickey’s shorts (get it, a Mickey short playing in a theater with chairs resembling Mickey’s shorts). Once seated, Guests will be tooned into the adorable short “Vacation Fun”.

“Vacation Fun” follows the story of Mickey getting ready to take Minnie on an incredible vacation. While packing, Mickey remembers some of the iconic and memorable moments in his life (which are also references to past Mickey Mouse episodes!) including “Couples Sweaters”, “Potatoland”, “Croissant de Triomphe” and more!

Fans of the Mickey Mouse television series really will love the Easter Eggs in “Vacation Fun” so be sure to keep those eyes peeled!

If you’ve never experienced this attraction at Disney World, the official description reads:

Get star struck at Disney’s Hollywood Studios when you join your best pals for a one-of-a-kind animated short featuring everyone’s favorite mouse and his leading lady.

Everything at this Hollywood theater is inspired by Mickey and Minnie – from fun, colorful architecture and framed movie posters, to hidden surprises just waiting to be discovered. The show, Vacation Fun, celebrates Mickey and Minnie’s favorite vacation memories, with never-before-seen animation mixed with clips from favorites like Panda-monium, Couples Sweaters, Potatoland, Croissant de Triomphe, Entombed, Dumb Luck, Al Rojo Vivo, Yodelburg and Outback at Ya!.

After the show, step into life-sized recreations of Mickey’s world and pose for a vacation photo with family and friends.

If you want to visit Disney World on your next family vacation but need help planning, we’ve got you covered! Get started today by clicking here.

The new Mickey Mouse cartoons, part of the Mickey Mouse television series, first debuted in 2013 with the episode titled “Croissant de Triomphe”. Ever since, these Mickey shorts have become a staple and favorite for so many Disney fans around the world.

Some of the most memorable and popular Mickey shorts from this series include  “Flipperboobootosis”, “The Adorable Couple”, “Potatoland”, “Eau de Minnie” and others. The Mickey Mouse series has brought us five incredible seasons as well as a spin-off series titled The Wonderful World of Mickey Mouse, now streaming on Disney+.

Have you watched “Vacation Fun” at Disney’s Hollywood Studios yet? Let us know in the comments below.