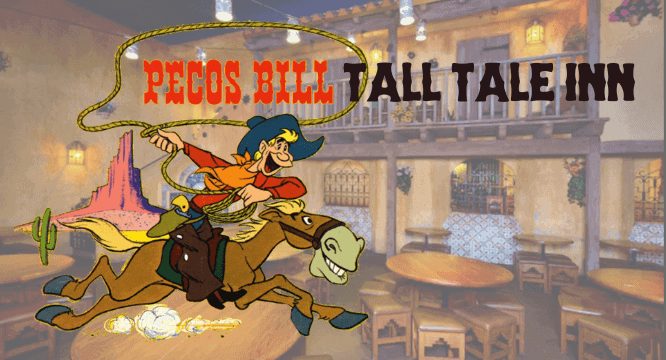 Yippee Ki-Yay! One of our favorite eateries in Magic Kingdom, Pecos Bill Tall Tale Inn, is awaiting a refurbishment. The famous Frontierland food stand selling Tex-Mex cuisine is due for some work this season. Starting after January 21st, 2021, immediate work can begin to update the Magic Kingdom cafeteria. Although we aren’t sure exactly what type of construction Pecos Bill could undergo, we love that Disney is keeping up with our favorite spots in Magic Kingdom.

As many places do in theme parks, Pecos Bill attracts Disney Parks Guests with it’s AC cooled dining spaces and fragrant smells. Once upon a time, the restaurant offered a toppings bar laden with complimentary queso. That dwindled to lettuce, tomato, and sour cream among a few other offerings. Now it seems the quick-service space is going to undergo “General Conditions” improvements according to a recently filed permit.

“General Conditions” improvements can be as basic as paint or new lights, or as intricate as flooring, appliances, or utility updates.  Perhaps the chefs are getting a new gas cooktop? We’re eager to see what’s being changed up as construction begins and continues through to the project’s end.

Many folks don’t know that Pecos Bill Tall Tale Inn is so large (at least three sprawling dining rooms) because it used to be the Mile Long Bar! According to D23:

Mile Long Bar Opened in Frontierland in Magic Kingdom Park at Walt Disney World on October 1, 1971, and closed on January 5, 1998. An ingenious use of mirrors made the bar seem like it was a mile long. Served light fare and cool drinks. Also in Bear Country at Disneyland, opened in 1972. Later named Brer Bar (1989-2002). Also in Westernland at Tokyo Disneyland, opened on April 15, 1983.

When you’re ready to plan a visit to Magic Kingdom to taste all that the theme park has to offer, contact the professionals at Academy Travel. They’re the planning cowboys that can help you mosy on over to the Most Magical Place on Earth!

What changes do you think we will see to this staple eatery at Magic Kingdom? Leave us a comment below with your thoughts!