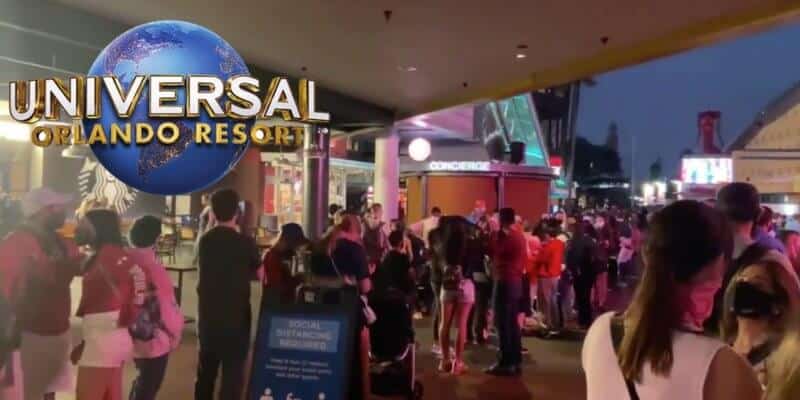 New Year’s Eve is often a huge ordeal at Universal Orlando, but this year is going to be different than the rest. With the pandemic altering theme park operations, both Universal Studios and Universal’s Islands of Adventure will not be celebrating their typical New Year’s Eve celebrations — but does this mean fewer guests will attend the parks?

During the past week, Universal Orlando Resort has been flooded with their maximum amount of guests — with more waiting outside the parks waiting to enter. Holiday crowds have had the parks hit capacity as early at 7:30 AM on weekdays, which during the pandemic, would typically never hit capacity — plus, the parks don’t even open until 8:00 AM so you can imagine the morning rush!

This evening, Universal Studios and Universal’s Islands of Adventure are both open from 8:00 AM – 10:00 PM — meaning Universal Orlando’s theme parks are not officially celebrating New Year’s Eve at midnight. That being said, it is interesting to take a look and see if guests will still show up, even if there are no evening festivities.

Bioreconstruct (@bioreconstruct) has been at Universal for the past couple of days and has already posted a crowd comparison from yesterday vs. today. As you can see below, the same section of Islands of Adventure is far less crowded than it was yesterday.

Lines to enter the park were pretty massive this morning, with guests waiting over an hour prior to park opening to get a spot in the parks. La Reina Creole (@LaReinaCreole) posted a video of guests being in line to enter the parks, with the line extending past the CityWalk sign.

Good morning Twitter! Check out the lines to get *in* to #UniversalOrlando. They back up all the way past the entrance sign to #Citywalk already ? #Orlando #Florida #WelcomeToFlorida pic.twitter.com/bWYFdHqwJQ

It seems that, although the parks have been more crowded at earlier times previously this week, New Year’s Eve will still be just as packed as every other capacity-filled day at Universal Orlando overall. The Universal Orlando Resort (@UniversalORL) Twitter recently Tweeted that although they are not currently at capacity (at the time this article is being written), they expect to hit it this morning.

Hello, we are not at capacity at this time, however we do expect to reach capacity this morning. Please keep an eye on our social media channels for any updates.

The theme parks may not be open for a New Year’s Eve countdown, but CityWalk will be open until midnight. Some guests may decide to head to the parks for the day, and then spend a few hours around CityWalk afterward to ring in 2021!

If you are heading to Universal Orlando today, make sure to keep an eye out on their Twitter, the Universal Orlando app, or call their capacity hotline (407-817-8317) to see if the parks are allowing guest entry at that time.

Do you think spending New Year’s Eve at Universal is worth it if it means you must leave before midnight? Do you think guests will try to linger until 2021?