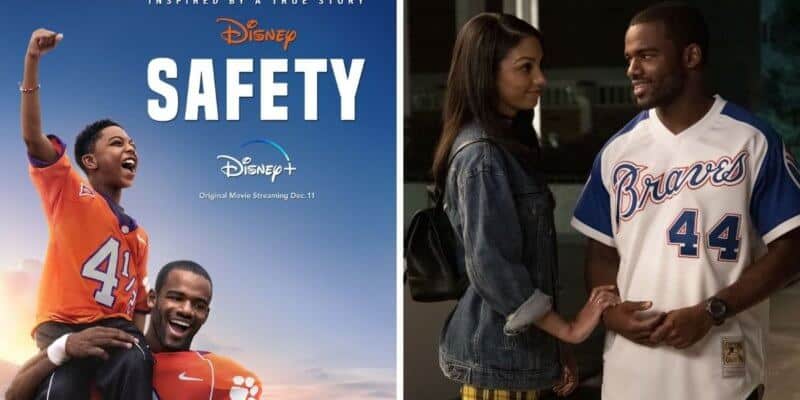 There are several inspiring sports movies out there that are based on true stories, including Remember the Titans, Moneyball, The Fighter, Invincible, The Blind Side, and many more. However, when watching Safety, the latest Disney+ original film, it touched my heart in a different way.

The year 2020 has not been easy. We have been thrown several unprecedented events that have affected all of us in many different ways. However, at the end of the day, this year has reminded me of what’s truly important in life — including recognizing those who are always there for you and will support you know matter what, even if you don’t initially accept the help — as well as made me a stronger individual. And in a way, that is exactly what Disney’s new film, Safety, portrays.

What is Safety About?

The film tells the true story of Clemson University football safety Ray-Ray McElrathbey, a young college Freshman facing a series of challenging circumstances, including juggling college courses, trying to succeed on the football field, and suddenly taking in and caring for his 11-year-old brother. With the help of his close friends, football teammates, and the Clemson Community, Ray-Ray sees that even with life throwing him unexpected challenges, he can overcome and persevere to achieve his dreams and goals.

A Film We Can All Relate To

This movie spoke to me on a personal level as we are going through a trying time in 2020. Though life has been throwing us curveballs, having a support system surrounding you is so important.

Safety shows how those support systems don’t have to necessarily be blood-relatives. We all have different family dynamics, and so the fact that sometimes your support doesn’t have to come directly from your direct family, speaks volumes for so many. For example, during the film, Ray-Ray realizes he has the biggest support system within the Clemson Community. From his teammates to his roommates to other close friends, a majority of those who helped him push through and achieve so much were those who were not blood-related. This just goes to show that sometimes, when you need someone to be there for you during a trying time, those who want to help you through don’t have to necessarily be your parents or siblings — they can be close friends, neighbors, roommates, a teacher or professor, etc.

The film also touches on how sometimes we, as humans, have trouble accepting help when it’s offered because we don’t want to feel like we are a “charity case.” However, just because your loved ones are offering help doesn’t mean that is how they are viewing you. They are offering help because they love you and support you and want to be there for you, and I think this is such an important and crucial lesson, especially in such a trying time that we are all experiencing right now. It is something we all can relate to and this film really portrays that on screen.

All in all, this Disney+ film is one that, football fan or not, everyone needs to see. It is the perfect balance of funny, emotional, heartwarming, and mind-opening — something we all need in 2020.

As a fan of Remember the Titans and The Blind Side, I went into this film with high expectations and I have to admit, Safety not only met those expectations but exceeded them. When I was watching the final scene, I was almost upset just because I didn’t want it to end.

I loved the balance of emotions this movie had on top of the various meanings behind the film. From not giving up to following your heart to accepting help when it’s handed to you and of course, recognizing the incredible support system that surrounds you even if you may not realize it — this film left an imprint in my heart, in more ways than one.

The official description of the film reads:

“Safety” is a drama inspired by the empowering story of former Clemson University football safety Ray McElrathbey (Jay Reeves), a young man facing a series of challenging circumstances, whose dedication and persistence help him to triumph over repeated adversities. Aided by his teammates and the Clemson community, he succeeds on the field while simultaneously raising and caring for his 11-year-old brother Fahmarr (Thaddeus J. Mixson).

Everyone needs to see this film when it debuts on Disney+ on December 11. I promise you will not be disappointed.