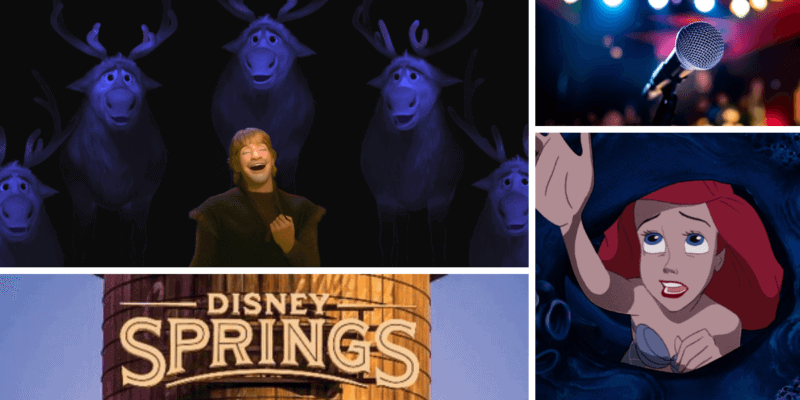 I’ll admit it: Imagineers at Walt Disney World has been hard at work to bring us the most amazing entertainment and attractions imaginable. We fans are able to experience unprecedented levels of immersion and we feel like we’re really there.

But there is one crowd-favorite idea that appears to have been passed over again and again. And that is the first-ever official Disney-sponsored Disney Karaoke Bar.

From going under the sea with Ariel and dining in the grand ballroom of Beast’s castle to flying our own magic carpet, Disney World has given us so many ways in which we can put ourselves in the shoes of our favorite Disney characters, but it has left out one of, if not, the most important ways. Disney Guests still don’t have an outlet where they are free to sing their favorite Disney songs as loud and soulfully as they can.

Related: OpEd: Why I Love Wearing a Mask on Disney Property

I think Disney fans need an appropriate place on Disney World property outside of their car where they can get on stage and own their favorite Disney banger, and the perfect place to put it would be the NBA Experience at Disney Springs.

The old DisneyQuest building already offers the perfect setup for a multi-level experience. Level 1 can be “Kids Only” (similar to a Disney Cruise Line Kids Club). Levels 2 and 3 can be exclusively for families, and Level 4 could be for anybody 21+. Currently, the NBA Experience only uses two levels, but DisneyQuest had five. So, there seems to be plenty of room.

When Disney World opened the NBA Experience, they kept it an extra-ticketed experience just like DisneyQuest. They could do the same for this karaoke experience, and I would argue that it will be significantly more profitable than the NBA Experience. For example, anybody who visits Disney World almost has to have at least some liking for Disney movies and their songs. Having a liking for basketball, on the other hand, not so much. Personally, I’d rather pay extra to belt my own version of “Friend Like Me” or put every other couple to shame by singing “A Whole New World” with my girlfriend than pay to do some basketball drills.

Imagine an extra-ticketed, reservation-only experience where you can finally have your moment in the spotlight singing your favorite Disney song with the official lyrics and official instrumental music from Alan Menken, Howard Ashman, Tim Rice, Lin-Manuel Miranda, Ned Washington, and so many others. Add a few drinks and maybe some entrees to cover dinner and make the night complete. I can’t not see such an offering being almost immediately sold out every night for weeks on end.

Obviously, even if Walt Disney Imagineering decided to build such a place, a Disney karaoke bar would not be able to open for some time. There are already so many construction projects currently in the pipeline and Disney must still deal with the restrictions surrounding the ongoing pandemic. And afterward, they would have to incorporate some rules to enhance the audience’s experience, like moving up at least two different songs in the lineup, separate two girls who both are dying to sing “When Will My Life Begin?” from Tangled, and every room except the Kids Club has a nightly 10-singer limit when it comes to Frozen songs like “Let it Go” and “Show Yourself.”

That being said, in my opinion, this multi-level karaoke bar could be the most magical place on Disney property, and it doesn’t need fancy simulation technology to make it so. It could just be a fun, safe place where a Guest can step on stage and step into the shoes of their favorite prince, princess, animal, villain, or demigod for a song or two. And it is a shame that such a place is not already around today.

Do you think there should be a Disney Karaoke Bar at Walt Disney World? If so, where do you think it should go? Let us know in the comments!