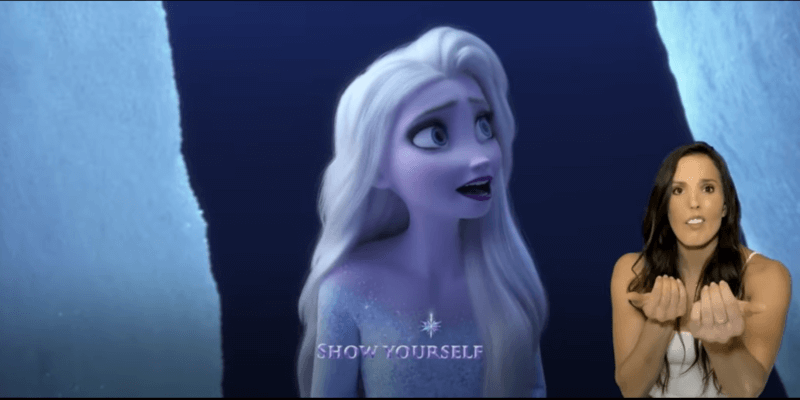 To commemorate this day and this month for all hard-of-hearing fans, Walt Disney Records has released a video of the beloved song from Frozen II, “Show Yourself” interpreted into American Sign Language (ASL) by Sarah Tubert.

Join us in celebrating International Day of Sign Languages and National Deaf Awareness Month with Sarah Tubert's beautiful interpretation of "Show Yourself" from #Frozen2. https://t.co/HFrHedQGIm pic.twitter.com/SGewGb7DaW

Tubert performs the song in front of the actual scene in which Queen Elsa completes her journey of self-discovery, and the song is performed by Idina Menzel (voice of Elsa) and Evan Rachel Wood (voice of Queen Iduna).

But Disney is not the first one to come up with an ASL interpretation for Kristen Anderson-Lopez & Robert Lopez’s heart-pounding anthem. In December of 2019, only a few weeks after Frozen II hit theaters, we at Inside the Magic shared an interpretation of “Show Yourself,” as well as “Into the Unknown” performed by fans of the movie and the song.

Read More: VIDEO: Frozen 2’s “Into the Unknown” and “Show Yourself” in Sign Language (ASL)!

Disney Music was not the only one to mark the special occasion, Disney Parks reshared a very special moment when a little girl named Shaylee visited Walt Disney World and found her favorite characters could understand and talk with her.

Titled “A Special Moment to Celebrate International Day of Sign Languages,” Disney Parks shared the video and said: “We just had to reshare one of our favorite magic moments. It proves that no matter what you speak or sign, magic is a universal language.”

Warning: You might want to have some tissues nearby.

And this was not an isolated occurrence. Here are some other stories we have covered of how magic has been spread through ASL in Disney Parks:

Comments Off on VIDEO: Disney Releases ASL Interpretation of ‘Show Yourself’