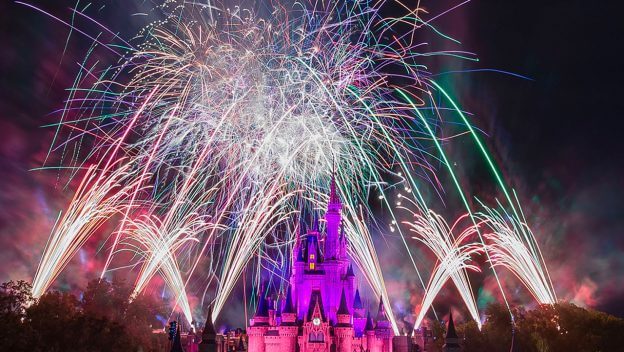 Walt Disney World will only be showing New Years’ Eve fireworks virtually this year, a first for the resort. While this change is of course due to the ongoing pandemic, Disney is doing their best to make it extra special for those wishing to enjoy the fireworks virtually.

While the hotel rooms at Walt Disney World will be showing holiday fireworks, Disney Parks Blog will show a different fireworks spectacular that people all over the world can enjoy. The show begins at 11:48 PM ET. Here are the details!

On the Disney Parks Blog, it was revealed that tonight’s virtual performance that will bring in the New Year will be a 2017 recording of the Fantasy In The Sky nighttime spectacular. However, this performance will be receiving a special twist ending: SPOILER ALERT!

The pre-recorded showing of “Fantasy in the Sky” from Walt Disney World Resort offers a variety of breathtaking views of the festive fireworks. Watch as the sky sparkles above Cinderella Castle to music from favorite films, including “Pinocchio” and “Peter Pan” – as well as tunes from Disney attractions.

Enjoy this look back at the classic Disney fireworks show followed by a spectacular finale, presented by Disney’s ”Godmothered,” a magical holiday comedy streaming on #DisneyPlus.

This new ending will incorporate something special from Godmothered, a new movie that debuted earlier this month on Disney+! If you have seen the movie, this will be a special treat. If you haven’t, there is still time to watch before the fireworks start at 11:48 PM Eastern time!

We love Godmothered, as it takes the viewer on an enchanted journey of the Fairy Godmother — a different fairy than the one we’re used to seeing in Cinderella. Here’s the synopsis:

“Set at Christmas time, Godmothered is a comedy about Eleanor, a young, inexperienced fairy godmother-in-training (Jillian Bell) who upon hearing that her chosen profession is facing extinction, decides to show the world that people still need fairy godmothers. Finding a mislaid letter from a 10-year-old girl in distress, Eleanor tracks her down and discovers that the girl, Mackenzie, is now a 40-year-old single mom (Isla Fisher) working at a news station in Boston. Having lost her husband several years earlier, Mackenzie has all but given up on the idea of ‘Happily Ever After,’ but Eleanor is bound and determined to give Mackenzie a happiness makeover, whether she likes it or not.”

To watch this performance of the NYE fireworks go to the Disney Parks Blog website! As mentioned, Disney will be showing additional pre-recorded fireworks performances on both the My Disney Experience app and in the hotel rooms at Walt Disney World Resorts.

Are you excited about this surprise ending to the NYE fireworks tonight? Let us know your thoughts in the comments!