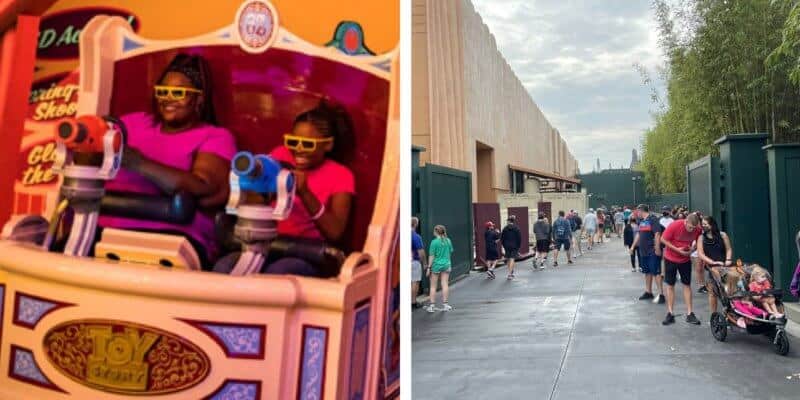 Waiting in line for a Disney World attraction during the pandemic is a vert different experience from what many Guests are used to, the main one being, the lines have large social distancing gaps within it, making the lines extend to lengths we have never seen! And now, at Disney’s Hollywood Studios, another attraction queue has headed backstage, and it’s not for a ride you may think.

It’s no surprise that Disney’s Hollywood Studios is one of the most popular Disney theme parks housing two of the newest lands at Disney World, Toy Story Land and Star Wars: Galaxy’s Edge where you can ride Slinky Dog Dash or Rise of the Resistance. Personally, I also find it the hardest park to get a Disney Park Pass reservation for, especially if you are an Annual Passholder.

That being said, although there are more popular rides, it seems that Toy Story Mania has been pretty busy this past weekend as the holidays roll in. Nitro (@Nitro230) took to Twitter to showcase the backstage line that the shooting attraction is currently holding.

That being said, at 2:50 pm on Sunday, December 20, Toy Story Mania has a 30 minute wait, which is shorter than Alien Swirling Saucers at 35 minutes!

If I were to guess how the line could be so long and the wait is so short, there is one of two explanations:

That being said, it just goes to show that right now, wait times at Disney World are often not as long as the lines appear due to social distancing in place.

If you want to hop in a long line that moves a lot faster than expected, this is the time to do it! Plan a Disney vacation and experience the Disney parks at a limited capacity. Click here to begin booking the magic!

Have you waiting in a line at Disney World that looked really long but ended up being much shorter than expected?