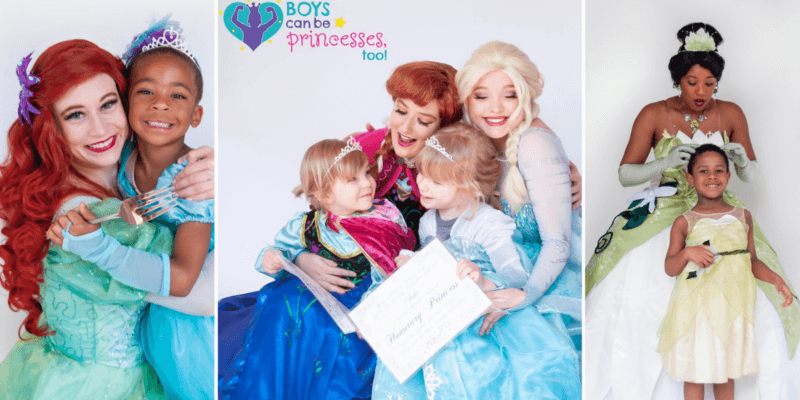 Credit: Kitty Wolf / Boys Can Be Princesses, Too

“No child should feel ashamed of the things that bring them joy.”

Disney has made huge strides to spread messages of inclusion and acceptance — and to share that no matter who you are or where you come from, your dreams can come true. But Disney fans often go above and beyond to share hope and encouragement, that if you keep on believing, there’s just no telling how far you’ll go.

We recently came across one photographer who’s doing just that: encouraging boys that they can follow their own dreams and be Disney Princesses.

Since 2019, Kitty Wolf — Chicago photographer and former owner of Princesscapades Princess Parties — has worked on the Boys Can Be Princesses, Too project. The project began after Wolf realized that while young girls are often able to and even encouraged to dress up as princesses, that isn’t often the case for young boys. So she made it her mission to spread a message of inclusion for all of the young boys who want to feel beautiful, accepted, and magical.

Here is how Wolf describes her project on her website:

During my time as a princess performer, company owner, and preschool assistant, I have seen boys being told that princesses are “just for girls” or that liking princesses and especially dressing as one somehow makes them weak, inferior or not boys. They’re told it’s not manly, or macho, or normal. This leads boys to feel ashamed of their interests, confused, sad, and lonely.

That’s why I have decided to produce a series of photos showing little boys dressed as their favorite princess, together WITH their favorite princess! I know there are little boys out there that love these fairy tale characters just as much as the little girls we meet doing princess parties. Our interactions with them have been, for whatever reasons, few and far between, but we see these boys, we know them, and we love them!

The first of the photos for the Boys Can Be Princesses, Too project are here!I'm thrilled to introduce you to Princess…

Posted by The Boys Can Be Princesses Too Project on Wednesday, April 24, 2019

“I want to show them it’s ok for boys to dress up as their heroes, even if that means they’re twirling around in a ball gown. Overall, I want everyone to see it’s ok to be who you are and like what you like!” Wolf’s website shares. “No child should feel ashamed of the things that bring them joy.”

More recently, in January 2020, the project shared another update, with even more photos of “little boys playing princess with their favorite fairy tale friends.”

? ?✨? The newest photos from The Boys Can Be Princesses Too Project are here! ?✨??I'm thrilled to introduce you to…

Posted by The Boys Can Be Princesses Too Project on Monday, December 2, 2019

The project is meant to show kids and adults that anyone can be a Disney Princess, no matter their gender. And, given how much Disney values acceptance, inclusion, and following your dreams, what could be a more “Disney” message than that?

There have not been any recent updates on the project, but we hope that with a little faith, trust, and pixie dust, we will hear about more magic coming soon from Wolf and her princess team.

You can click here to visit the official website for Boys Can Be Princesses, Too. There, you will find a gallery of photos as well as ways to donate and participate.

Is there someone in your life who would feel uplifted by these photos? Share this story with them!

Comments Off on Photographer Shows Anyone Can Be a Disney Princess