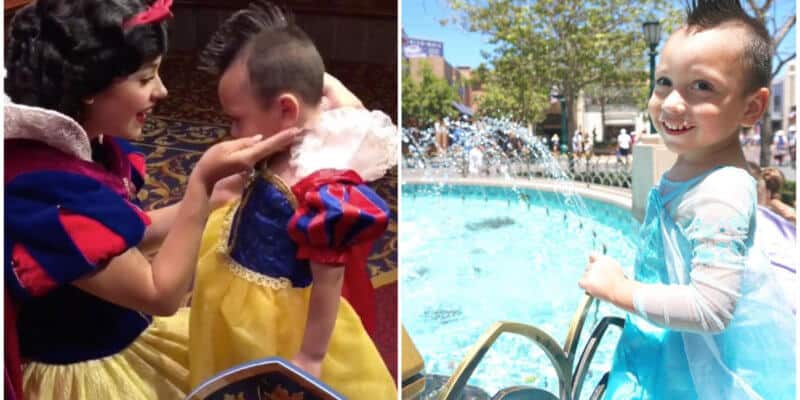 Eeka Rocha McLeod enjoys making her four-year-old son Evan McLeod as happy as she possibly can as her son has faced a different set of trials in his young life. So to do so, she takes him to Disneyland every single week and lets him dress up as his favorite Disney Princesses to meet and greet with his favorite Disney characters.

“Not all of them know him, but quite a few do,” McLeod said to CBS News as she described their frequent visits to the happiest place in the world. “The cast members know him as well. And don’t judge me, but the restaurants and churro cart vendors definitely know.”

Winter is coming ❄️ ••• Elsa arrived at the parks ready to educate those Halloween clad chipmunks about which season is the best! ? I kid, I kid. We are Halloween addicts, but Evan couldn’t resist wearing his Elsa dress with all the new Frozen II merch out in the parks right now. Check out his new Olaf swag! Do you wanna buy a snowmannnnn??? And yes, I just sang that out loud ? The minute I saw this bag had hit the parks I knew I would be adding it to his collection ? You can find the Olaf Loungefly backpacks in World of Disney in the Frozen II section. It was $90 before my annual passholder discount ? Is there any merch you want more info about?? Tell me in the comments below ???? ••• Stay cool, friends ⛄️ . . . . . . . . . . #happiestplace #disneyfamily #disneykid #disneymom #disneyannualpassholder #disneyfans #disneylandforever #disneyparks #disneyside #disneyaccount #disneykids #happiestplaceonearth #disneyblogger #disneyaddict #disneyigers #disneylandresort #disneygram #ilovedisney #disneycommunity #annualpassholder #abc7eyewitness #disneymoms #disneyfrozen #olaf #loungefly #princessboybounds

McLeod shares their visits to the California Disney Parks on her Instagram, where followers of Evan and the rest of the family are able to follow along with the magic they all enjoy together at the parks. Most of which, includes Evans interactions with several princesses, who Evan has befriended.

The enchanted young boy from Orange, California seems quite happy in his mother’s Instagram pictures. However, this wasn’t always the case. Evan is now adopted to his new family with Eeka. Although, he was once with his birth mother who was a drug addict and gave birth to him prematurely. Additionally, Evan is autistic and has been diagnosed with microcephaly (a condition where the head (circumference) is smaller than normal. Eeka has also shared that Evan also suffers from “global developmental delays” as well.

“His muscles are weak, he’s only begun talking recently and still struggles with speech, and his social interactions are always a little unique,” says Eeka.

Although, one thing that always seems to brighten his spirits is visiting Disneyland, which the boy just recently begun wearing dresses to.

Just when I think Disney can’t possibly outdo itself, it goes and does all the outdoing all over again ?? Also, I’m not crying, you’re crying ? ••• To the cast members who continue to make every moment of our weekly trips magical AF, thank you! My sweet Evan has two conditions that make life a little extra challenging, autism and microcephaly. He can be WAY too handsy with the CM’s and characters, loves to rip at their outfits, and pulls them all over the place. Each time I go to apologize or explain to one of them why he does the things he does (i.e. licking random Disney walls ??‍♀️) they always reassure me that they enjoy interacting with him and can totally handle his unique behaviors. ••• Today he was so excited to wear his Evil Queen dress (made by the amazing @musiccitymousecouture) that he struggled a lot more than usual. But he had magical moment after magical moment in the parks. My heart feels like it might burst right now so imma stop typing and just leave this picture right here. For all of my fellow mamas and papas out there raising Magically Gifted children, our love and support are always with you ✊? . . . . . . . . . . . . . . . #happiestplace #disneyfamily #disneykid #disneymom #disneyannualpassholder #disneyfans #disneylandforever #disneyparks #disneyside #disneyaccount #disneykids #happiestplaceonearth #disneyblogger #disneyaddict #disneyigers #disneylandresort #disneygram #ilovedisney #disneycommunity #annualpassholder #disneylandcastandcommunity #abc7eyewitness #abc7community #evilqueen #disneyvillains #disneymoms #specialneedsfamily

Eeka shares that Evan first asked to wear dresses to Disneyland earlier this year when they were getting ready for one of their weekly trips to the theme park. “I thought at first he was confused, so I kept showing him the knight outfit and he was adamant that he wanted Snow White,” McLeod said.

Ever since, Eeka has let Evan embrace the magic of the parks and continue to dress up as Disney Princesses.

“It didn’t take long for me to realize that Evan’s way of thinking and behaving wasn’t so different from most children,” McLeod wrote in an Instagram post, which shows Evan in a princess costume.

Maleficent: Mistress of Evil hits theatres tonight! It should be a delightfully wicked good time, beasties ? We already have tix for tomorrow night! We couldn’t miss seeing this Disney villain during the spoopiest time of year ? Who’s your favorite Disney villain? Tell me in the comments below ???? ••• Evan has been all about collecting @loungefly backpacks lately and when he saw this one he just had to have it. You can find this horned treasure in The Emporium on Main St and New Century Jewelry, which is where he found this one ? Super cute, right?! . . . . . . . . . . . . #happiestplace #disneyfamily #disneykid #disneymom #disneyannualpassholder #disneyfans #disneylandforever #disneyparks #disneyside #disneyaccount #disneykids #happiestplaceonearth #disneyblogger #disneyaddict #disneyigers #disneylandresort #disneygram #ilovedisney #disneycommunity #annualpassholder #abc7eyewitness #maleficentmistressofevil #disneyvillains #loungefly #disneymoms #disneymerch

As much as we’d like to think Evan is getting his happy ever after. Eeka reveals that Evan still faces struggles among his peers from time to time. Eeka shared in a post: “The first time I heard another child tell my son he was weird and to get away from her my heart shattered. He is autistic and has microcephaly. I have been through some hard times, but in that split second I felt devastation like I’ve never known before. And for a moment (just a moment) I wished that he wasn’t “different.”

However, in the same post, she continues by saying she’s learned from her son that it doesn’t matter what others think and all you can do is be your “authentic self.”

“Being your true authentic self isn’t always easy, but my children are WORKIN’ IIITTTTT *snap snap*! I teach them to love one another and to always always ALWAYS practice kindness even in the face of adversity and hatred…Evan is not only rocking that Snow White princess dress like the true queen that he is, but also completely owning his authentic self! Let’s celebrate our differences instead of using them as weapons against one another (just like Evan is doing in his sparkly dress). Love is love”