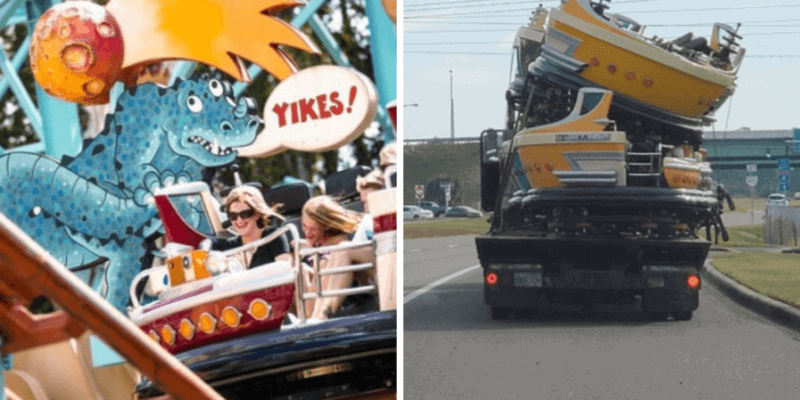 Animal Kingdom is the home to DinoLand U.S.A. DinoLand U.S.A is currently undergoing some major changes as the wild mouse coaster, Primeval Whirl is being removed. What could Disney have coming next for the arguably least immersive land within Animal Kingdom?

Disney announced that Primeval Whirl would be leaving the park, but they never announced is anything would replace it. Recently, we saw photos of the ride vehicles heading down the highway as more of the attraction is being dissasembled. Disassembling an attraction comes at a great financial cost, so it is unlikely that Disney would lose an attraction and pay for the removal of the attraction without having something else in mind to replace it.

DinoLand U.S.A has one major attraction now, and that is DINOSAUR. The rest of the land is now comprised of retail, quick service, and a lot of carnival-style games.

Comparing the carnival atmosphere of DinoLand U.S.A to Animal Kingdom’s newest land, Pandora -The World of Avatar, it is no wonder Disney would want to make some changes. Here is a picture of the floating mountains you can find in Pandora:

And here is a picture DinoLand U.S.A:

Due to the ongoing global pandemic, it is unlikely that Disney will replace the Primeval Whirl attraction right away. Disney has already publically stated which projects they are prioritizing, and which they are not. Many construction projects like Reflections- A Disney Lakeside Lodge are on hold indefinitely.

Right now it looks like DinoLand will just have a large empty space where Primeval Whirl used to be, and due to the financial losses suffered due to the pandemic, it could take years before Disney announces a replacement for the attraction. However, we continue to await more news from Disney, and we’ll report back when an announcement is made.

So what do you think could be coming next for DinoLand U.S.A? Let us know your thoughts in the comments!

We can help you plan the perfect Disney World vacation, click here for more information!