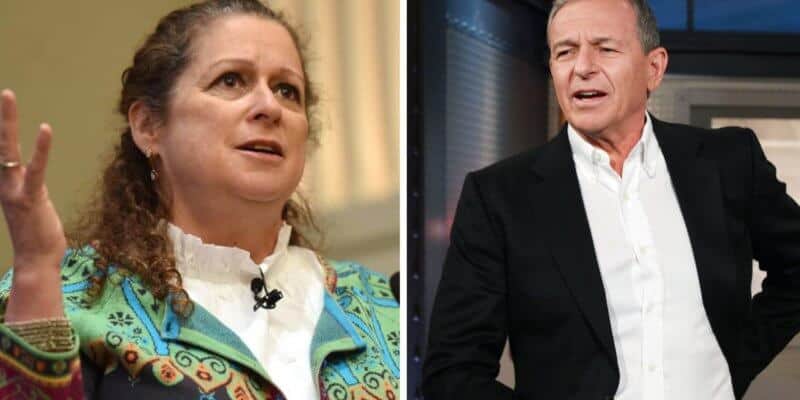 If you have heard of Abigail Disney before, you likely know she is an heiress to the Walt Disney Corporation as well as its biggest criticizer. Roy O. Disney’s granddaughter speaks up time and time again, often attacking the C-suite level employees, and she now has pointed out something that she believes is another injustice that must be corrected.

KCRW’s The Business podcast interviewed Abigail Disney recently to discuss the pandemic, layoffs, and what is going on at the Walt Disney Company. For Abigail, the biggest disconnect in the company — and the reason she thinks it is going to not only fail but have a major sudden fall —  is the pay grade difference between high-level executives and Disney Cast Members.

“The high, high compensation at the top tends to come as a reward for pushing down compensation at the bottom. When I try and draw a direct line between how the C-suite is paid and how the hourly workers are paid, when I try to draw a direct line between some of those things, I think they look at me like I am speaking in some kind of alien language, because to them that is the dumbest thing they have ever heard. To them there is no relationship between what we pay a line worker or a shift worker and what we pay Bob Iger.”

Acknowledging the mass layoffs that the Walt Disney Company has resorted to this year, releasing tens of thousands of Cast Members from the company, Abigail points out her disagreement with how Disney could allow their Cast Members to have to, “lose their houses, [become] homeless, and steal things to eat,” when C-suite level executives such as former CEO and current Executive Chairman Bob Iger earn millions. She notes that, although her grandfather Roy was a successful man, he “would have never taken a $66 million payday” because it just wasn’t done.

“My grandfather made a lot of money, and he provided for me and my children of course, he wasn’t shy about taking compensation. I’m not talking about ownership, I am saying are you willing to put everything you have up again and again and again, every single time, with the chance of losing everything, because that is what my grandfather did… He would never have taken a $66 million payday, never. And not because he was a perfect guy, but because it wasn’t done, it just wasn’t done.”

The $66 million dollar payday is a direct reference to Bob Iger, a man she believes was as good of the leader for the Walt Disney Company as he could have been since he was more interested in acquiring IP’s such as Pixar or Lucasfilm as opposed to advocating for creativity within the company. That being said, the acquisition of these companies, especially Lucasfilm, has been a saving grace for Disney amid the pandemic. Disney+ is thriving due to it’s Star Wars content, with The Mandalorian being the hit show of 2020.

Abigail also thinks that Iger’s decision to appoint Bob Chapek as CEO is a direct reflection of her opinion of him, as Chapek has never worked as a creative, and is now at the helm of a company that thrives on creativity.

The battle between Abigail Disney and the Walt Disney Company is sure to continue, and we will just need to watch how the future unfolds to see what the Disney heiress has to say next.

Do you agree with Abigail Disney? Do Cast Members deserve higher pay and should high-up executives lose some money? Should Chapek have ever been appointed CEO?