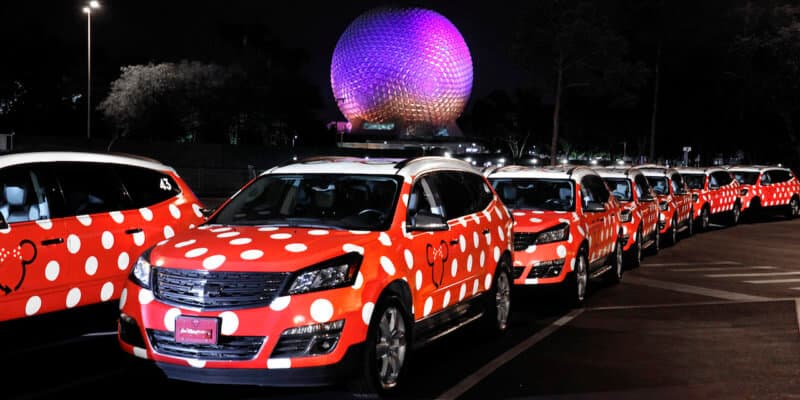 If you ever wanted to own the Main St. trolley on Magic Kingdom, we might have the next best (and likely more affordable) option. It appeared to some fans that the Minnie Vans were “for sale” at a dealership. Though we quickly found out they weren’t for sale, the Minnie Vans are at a dealership in Florida. But for what reason? We have the scoop!

It seems like a Minnie Van would make the perfect Christmas present. Well, that is if you would want to buy a used car for $45,000 (magic of Disney included). The Monorail Times (@monorailtimes) took to Twitter and said, “Apparently local Chevy dealer is selling Minnie Vans for 45k,” based on a photo of the Minnie Vans that was shared in a private Facebook group. At the time this Tweet was posted, it was still unconfirmed information, and that original Tweet was deleted since our initial publication of this article.

Apparently, it was also being suggested that the fun polka dot wrap will have to be removed if the vans were to actually be sold. This would make sense since Disney likely would not want non-Disney employees driving a vehicle that was previously used as an official Disney ride share van through Lyft.  Personally, if I were to pay well over the going rate for a used Chevy that has had countless amounts of people sit in it for the past few years, I would want the Minnie Van wrap to stay on.

However, since publishing this article initially, we have received word that the Minnie Vans are, in fact, NOT for sale. As it turns out, they are at a dealership in Tampa for maintenance purposes only. An Inside the Magic reader shared with us that Don Mealey Chevrolet has confirmed the Minnie Vans are being maintained at that dealership and are not being sold. Our ITM reader who shared this information with us happened park next to the Minnie Vans and confirmed that yes, they were at the dealership, though they are not for sale. Sorry, folks!

We shared earlier that if the vans were actually for sale, it could also indicate bad news for Minnie Vans at Walt Disney World. Right now, the future of Minnie vans does not look very bright, as the service has been suspended ever since the Disney World theme parks temporarily closed back in March. Right now, it is unclear when the Minnie Vans will return, but knowing they are at a dealership for maintenance could give some of us hope.

That last update we heard regarding the indefinite suspension of Minnie Vans was that:

Minnie Van service is temporarily unavailable at Walt Disney World Resort. Please note that Minnie Van service to and from Orlando International Airport will not be available for bookings until further notice, including as either a package add-on or standalone option. We are working with guests with existing Minnie Van bookings to arrange alternate transportation during their stay.

However, you can use the Magical Express to get to your Disney Resort!

Originally, Guests could scrap the Disney bus system and order a Minnie Van through Lyft for a flat rate of $20.00 to go anywhere on Walt Disney World property (while on property). Although this can seem pricey, you had a huge car which was great for larger parties, car seats, and a very knowledgeable Cast Member to guide your journey. Plus, you got to ride in a red and while polka dot van!

Would you spend $45,000 on a Minnie Van? Or do you hope the Minnie Vans are coming back to Disney World in the future? Let us know!