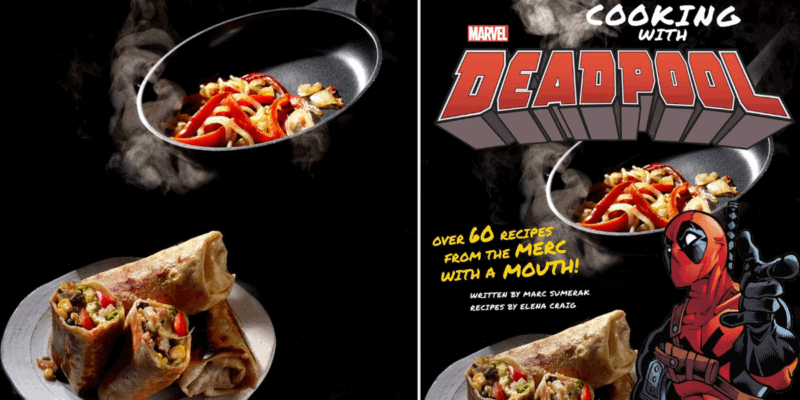 You too can learn to cook like the merc with a mouth with this brand new cookbook – Cooking With Deadpool is coming in 2021!

The book offers-up a whole host of exciting recipes, all with Deadpool’s signature risque sense of humor!

It’s the ultimate gift for any comic book fan and especially Marvel comics.

Cooking With Deadpool will release in February

It may seem like it’s a long way off, but February will soon be upon us! Cooking With Deadpool will launch on February 2 and will be available to purchase on Amazon. Here’s what the website has to say;

‘Deadpool brings his inimitable style, foul-mouthed humor, and notorious skill with a blade to the kitchen in this hilarious take on a traditional cookbook, featuring classic recipes with a Deadpool spin and a whole lotta chimichangas.

No super hero takes food quite as seriously as Deadpool. In this gorgeously designed cookbook that paid reviewers have described as “glorious” and “the best cookbook I’ve ever read,” Deadpool offers his take on a curated collection of epicurean classics. Narrated by the wisecracking super hero (and sexy master chef) himself, this book also incudes recipes inspired by some of his closest friends/enemies (Here’s lookin’ at you, Spidey) and his favorite meals, including chimichangas, tacos, pancakes, and hamburgers with no pickles.

This comprehensive culinary guide is complete with recipe modification suggestions, illustrations, and mouthwatering full-color photography. This is the ultimate gift for seasoned cooks and Marvel fans alike!’

We hate to tell you, but Cooking With Deadpool is, in fact, not written by Wade Wilson / Deadpool (or Ryan Reynolds). It actually comes courtesy of Marc Sumerak, whose former hits include Star Wars: Galaxy’s Edge The Official Cookbook and Star Wars: Secrets of the Jedi.

The book features 60 mouthwatering recipes including more than a handful of chimichanga dishes and is written to sound just like Deadpool himself!

If your dream is to feel like the merc with a mouth and learn how to make some delicious meals to boot, this is the cookbook for you. Hopefully, with the announcement that Deadpool 3 may finally be on the way, we’ll be able to cook up a fantastic chimichanga based meal AND watch a cool new Marvel movie.

Deadpool was last seen in Deadpool 2, which starred Ryan Reynolds, Josh Brolin, and Zazie Beetz. It is thought that Disney may finally be continuing the series, though whether he’ll be part of the Marvel Cinematic Universe is unknown.