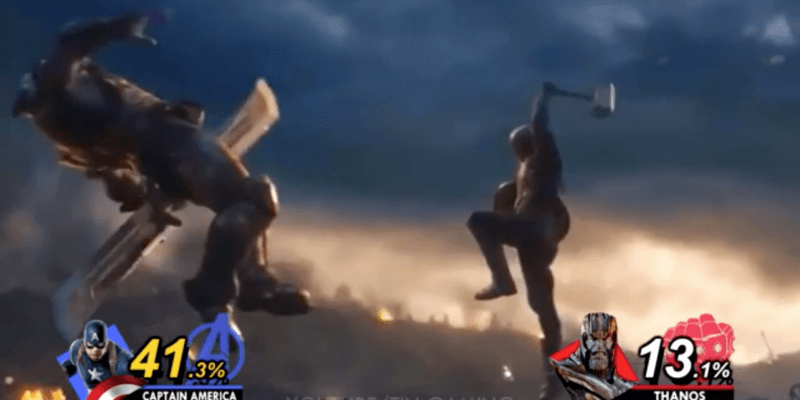 It could be argued that most Marvel fans will never forget the epic battle that took place at the end of Avengers: Endgame — especially the beginning where Captain America finally wields Thor’s Hammer, Mjolnir.

That moment when Cap goes toe to toe with Thanos has been played over and over across the internet. Now, one fan has given the scene a Super Smash Bros. overlay.

We see Thor pinned by Thanos, with an incredibly high damage percentage. One more blow and he’s done. Thanos is sitting at only 7% damage. Once Thanos sees Captain America holding Mjolnir, he delivers a final blow to Thor and we hear the announcer shout “DEFEATED.”

Then Cap delivers one unanswered blow after another and knocks Thanos down to 36% damage before eventually losing the match.

It’s hard to keep a straight face. The epic superhero score is replaced with the light, dinky Smash Bros soundtrack, and fighter sound effects, but the synchronization works very well.

The video was uploaded to Reddit, and the comments did not disappoint.

Thundra39 commented: “My only disappointment is the lack of Pika scream from Cap when he drops the lightning”

PharaNuff wrote: “Oh come on cap, he’s a heavyweight, he’s combo fodder! Did you even try to tech that landing? Amateur.”

shibataWrestler said: “This was probably one of the 14 million results Dr. Strange saw!”

Filipinose stated: “Sometimes I like to pretend I’m destroying the original Avengers as Thanos. I’ll have all the computers set to 5 (Captain Falcon as Cap, Samus as Iron Man, Simon as Thor, Shiek as Black Widow, Pit as Hawkeye, and Donkey Kong as Hulk), and then use Ganandorf as Thanos.”
TheLastSonOfHarpy said: “I seen the Cap Mjolnir clips many times but they usually cut out the end part when Cap starts struggling. Damn what a good scene.”
Thankfully, though, the game does not actually end there. Cap gets up. So does Thor, and just as he is ready to go for one last bought, all of the Avengers finally assemble. But it arguably gets one thinking about how awesome it would be like to have Marvel’s superheroes in a fighting game like Super Smash Bros.

Which Marvel Character would you fight as in a “Super Smash Bros” style brawl? Let us know in the comments!