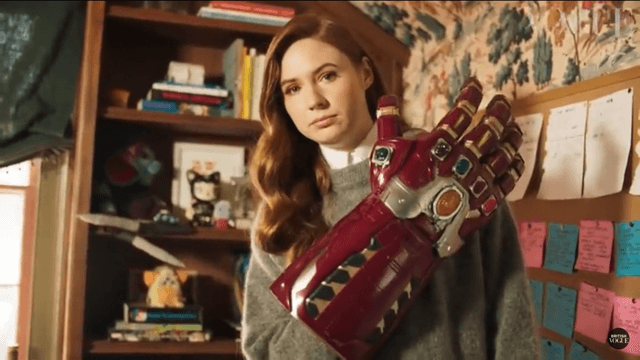 To the Marvel Cinematic Universe, she’s known as Nebula, but to the rest of the world she is Karen Gillan and she’s pretty awesome. Gillan recently had Vogue visit her home to learn a little bit more about the Guardians of the Galaxy star.

Even though we are used to seeing Gillan in front of the camera, she lets fans know that she also loves to write. In her home office, in fact, she is constantly writing horror films. She has quite the acting resume and has acquired writing and directing credits for a handful of short films — most of which have a horror element.

Karen Gillan’s home office is also filled with fan gifts/art and Marvel memorabilia. She has a collection of Marvel Comics — she takes her job seriously! Gillan also has a toy Infinity Gauntlet. A fan from Russia made her a Russian nesting doll featuring characters she has played, including Nebula.

However, probably the most impressive of all is a fan made gift. This Marvel fan made Gillan a Nebula puppet! Watch her use the puppet in her famous Nebula voice below:

In the video, Gillan claims she has a lot of projects in the works. That is not even including the upcoming Guardians of the Galaxy 3. Gillan has already read the script for the next installment in the franchise and she revealed to Yahoo Entertainment:

“I can say that I’ve read it and it’s amazing. We’re all really excited that James is back to complete the trilogy because it wouldn’t have felt right without him. It’s a wonderful, wonderful script.”

The actress is also incredibly proud of her character’s arc, saying:

“When I signed on to Nebula, it was eight days of filming, and she was supposed to die in the first Guardians film. So to go on and be able to evolve the character and then have her be this pivotal role in Endgame was amazing. I didn’t see it coming at all.”

It’s safe to say that we will be seeing a lot more from the Avengers star in the near future!

What are your thoughts about seeing more from MCU’s Karen Gillan? Let us know in the comments!