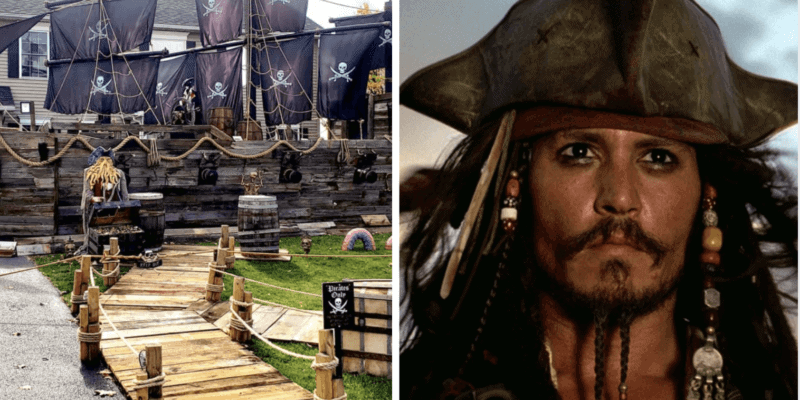 Calling Captain Jack Sparrow! A Rochester, New York area homeowner has transformed his front yard into a set worthy of Disney’s Pirates of the Caribbean franchise for the 2020 Halloween season.

On Instagram, Tony DeMatteo shared this picture of his incredible pirate ship themed display, which takes cues from the Black Pearl and the Flying Dutchman — even Davy Jones and the Kraken’s tentacles make an appearance!

I can barely fit everything in 1 picture! And there’s more coming!

When we start the music/light/special effect show… this is not just a pirate ship to look at, its a Disney-level experience!

The show starts next week. Wed-Sun dusk until 830 or 9. Captain Jack is coming for an Open Door Mission food drive on Oct 30th.
Watch for more details!

Heavy rain or high winds will cancel the show. The sails will be rolled up to prevent damage.

Show Music should be playing on 88.7 FM.

If you happen to be lucky enough to reside in upstate New York, this would be an amazing socially distant drive-by Halloween activity for the whole family — especially if you love Pirates of the Caribbean as much as we do at ITM!

Davy Jones is ready to protect his treasure!

There is even a preview of the pirate ship’s impressive light show, which local visitors will be able to enjoy in-person, weather permitting:

What’s next for POTC?

Although Walt Disney Studios has not yet confirmed that there will be a sixth POTC film following Pirates of the Caribbean: Dead Men Tell No Tales (2017), rumors have been swirling online every since the fifth installment in the swashbuckling series hit theaters.

The Pirates of the Caribbean movie franchise Wikipedia page features a brief history of what is happening with a potential sixth film:

By March 2017, director Joachim Rønning stated that Dead Men was only the beginning of the final adventure, confirming that it would not be the last film of the series.[4] In September 2017, producer Jerry Bruckheimer indicated that another Pirates of the Caribbean is still in development.[5] In October of the same year, Kaya Scodelario stated that she is contractually signed to return for a sixth film.[6] Shortly after, it was confirmed that Rønning will direct the film.[7] In May 2020, there were reports that the studio was considering Karen Gillan, Daisy Ridley, and Emma Watson for a new character,[8] while Bruckheimer commented that the first draft of the screenplay for the sixth film would soon be finished, adding that he was “unsure” of Depp’s role in the movie.[9]

There were also, at one point, rumors that former Disney Channel star Zac Efron would take over Depp’s role as the lead character in a Pirates of the Caribbean reboot or possible prequel. Details about whether or not Orlando Bloom (Will Turner) and Kiera Knightley (Elizabeth Swann Turner) would consider returning have not been announced at this time.

What do you think about this Pirates of the Caribbean inspired Halloween display? Would you transform your own yard into a movie-like set for the spooky holiday?