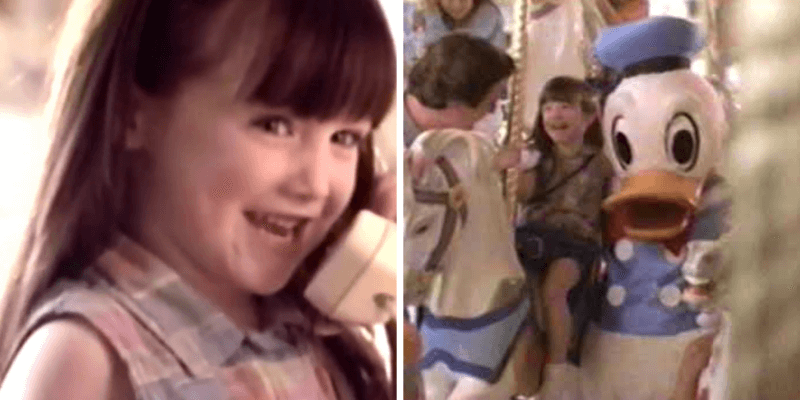 Disney has touched the lives of so many people during their formative years. From its theme parks to films, everything about Disney is magical, especially when you’re a kid. As such, even seeing a nostalgic Disney commercial can really get us sentimental adults teary-eyed.

That’s exactly how we felt when we re-discovered this classic ad from the 90s, which many of us remember fondly.

Of course, nowadays, there are still Disney commercials — they’re just more likely to be viewed on YouTube or Facebook. Regardless, it’s still fun to take a look back in time and admire the heartwarming commercials of old.

Nostalgic Disney commercial brings out the kid in all of us

Hands up if you remember this one. This video was made to promote both Walt Disney World and Disneyland at the peak of the ‘Disney renaissance’ film period. It features an adorable little girl as the lead and shows her enjoying a day in the happiest place on Earth.

She has a chat with Goofy on the phone before meeting some of her favorite Disney characters, including one of the Seven Dwarfs, Princess Jasmine, and Mickey Mouse himself.

The commercial is apparently taken from the 1995 VHS tape version of the 1950 animated classic, Cinderella. It was clearly designed to get Disney movie watchers out of their seat and into a theme park.

Check it out and re-live the magic of experiencing the Disney parks as a child!

Yep, just thirty seconds of seeing this young girl enjoy the most magical place on Earth and we already can’t wait to be back to our favorite Disney park.

Mind you, I wish Mickey was always right at the end of the park, ready to bid me farewell. It would sure save a lot of time queuing up for character meet and greets!

While we sadly didn’t get this exact advert in the United Kingdom, I can fondly remember a similar nostalgic Disney commercial for Disneyland Paris (called EuroDisney at the time). It’s a testament to the power of the Mouse that its advertisements can leave just as much of an impact as its movies!

Even the end slate is magical — ‘There’s never been a better time to make the dream come true.’

Do you remember this Disney commercial? Let us know in the comments below.