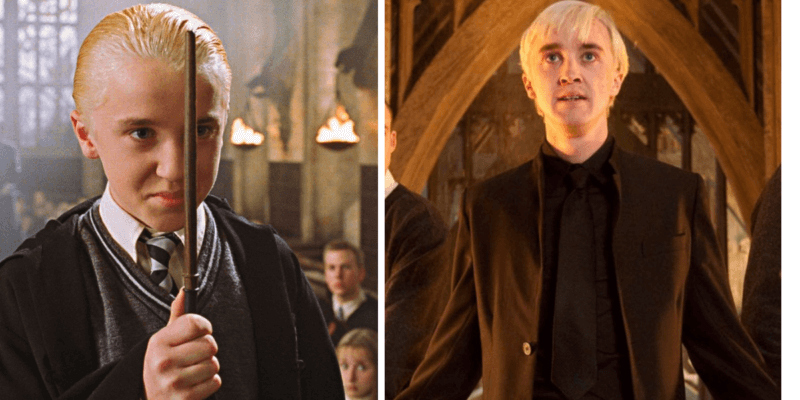 Fans of the Harry Potter series of books and films have always had a soft spot for Slytherin bad boy Draco Malfoy. Harry’s rival has been an iconic character since he first appeared in The Sorcerer’s Stone / Philosopher’s Stone, but have you ever thought about Draco Malfoy’s screen time?

How much time in minutes does he actually have on screen across the eight movies? The answer might shock you.

I’m sorry, what? Across a 19 hour and 40 (ish) minute long franchise, Harry Potter’s main rival and student antagonist only has half an hour of screen time? For some perspective, Harry Potter himself has nearly nine hours of screen time, meaning he’s visible for just under half of the entire eight films total runtime.

For more perspective, Neville Longbottom has more than 50% more than Draco Malfoy’s time on camera, with 47 minutes on-screen across the eight movies.

This is especially baffling considering how popular Tom Felton’s portrayal of Malfoy has become. His lines are some of the series’ most iconic and in the first movie, most Harry Potter fans agree that he turns in the strongest performance of the kids.

Rest assured, this news was not ignored by the Harry Potter community on Twitter, with many expressing shock and disbelief at the numbers. It’s difficult to believe, but when you stop and think about it, it does make sense.

Malfoy and his father Lucius are important to the overall plot, but with the exception of the first two films, they don’t do a whole lot until The Half Blood Prince / Deathly Hallows. JK Rowling’s Wizarding World obviously wasn’t able to offer the same level of depth, and many characters received reduced roles. Malfoy was seemingly one of them, though you wouldn’t know considering the character’s enduring popularity with Harry Potter fans.

Philosopher’s Stone introduces Tom Felton as the slimy Slytherin who attempts to coax Harry to the dark side. He notably challenges Harry to a broomstick chase for Neville’s Remembrall during their first flying lesson. He also has an early encounter with Lord Voldemort while serving detention in the Forbidden Forest with Harry, Hagrid, Ron, Hermione, and Fang.

Malfoy has a fair bit to do during The Chamber of Secrets. He first turns up with Lucius to taunt the Weasleys at Flourish and Blotts, when his father slips Ginny Tom Riddles diary. He also joins the Slytherin Quidditch team as its new seeker and duels Harry, causing him to reveal he can speak Parseltongue. Malfoy is then interrogated by a polyjuice potion-d Harry and Ron, pretending to be Crabbe and Goyle in the Slytherin common room.

Prisoner of Azkaban doesn’t give Draco much to do and his most memorable moment comes from being punched in the face by Hermione for ridiculing Hagrid. He bears little impact on the overall plot revolving around Sirius Black, Peter Pettigrew, and Remus Lupin.

In The Goblet of Fire, Draco again isn’t given much screentime. His most notable action is being turned into a ferret by a polyjuiced Barty Crouch Jr.

Malfoy becomes a Slytherin prefect during The Order of the Phoenix and works with Delores Umbridge as her enforcer. He is instrumental in forcing Cho Chang to rat out the Order.

Draco Malfoy’s screentime starts to get longer during the sixth film, The Half Blood Prince, as he embraces his life as a Death Eater. He notably duels Harry, lets his fellow Death Eaters into Hogwarts, and fails to murder Albus Dumbledore, leaving it to his mentor, Severus Snape.

Related: Why Haven’t You Received Your Hogwarts Acceptance Letter?

The Deathly Hallows Part One and Two see more of Draco and expands on his change of character hinted at during the sixth movie. He ambiguously saves Harry’s life by mis-identifying him in part one and in turn has his own life saved by Harry during their skirmish in the Room of Requirement (Goyle isn’t quite so lucky). Draco is seen in the final scene nineteen years later sending his children off to Hogwarts, which then leads on to the events of Harry Potter and the Cursed Child, but that’s a whole other story!

You can check out all of the character’s individual screen times at IMDb. As for Draco, his lack of screen time just serves as a testament to what a great performance Tom Felton gave.

To make such a memorable character out of just thirty-one minutes of screen time is no small feat! People will always have their favorites; Luna Lovegood, Molly Weasley, Severus Snap and many more. But when Draco Malfoy spits out the word ‘Potter’ with all the venom a Slytherin can muster, you can’t help but love to hate him.