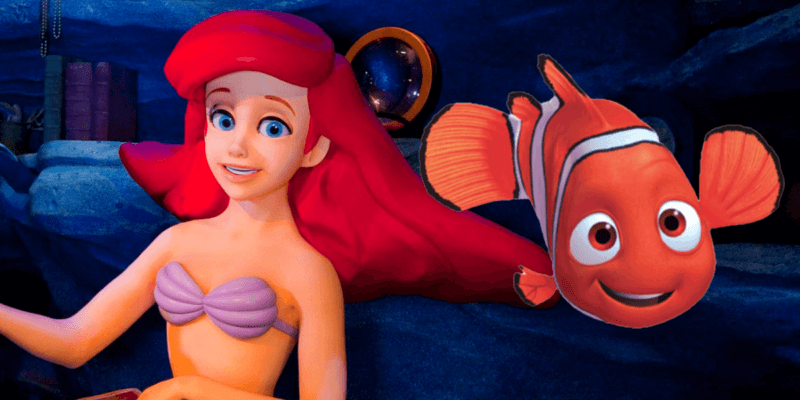 The seaweed is always greener in somebody else’s lake!

Whether you love it or hate it, The Little Mermaid – Ariel’s Undersea Adventure is a staple at Disneyland Resort’s Disney California Adventure Park.

During a hot day when your dogs (that’s your feet) are barking, and your kids are crying, escaping to the 10-minute, air conditioned haven that is Ariel’s Undersea Adventure is the next best thing to watching Frozen at the Hyperion! Once you descend “underwater,” you’re a part of the fun that happens Under the Sea. Sebastian has gotten his crustacean band a-goin,’ and Ariel has earned herself some feet! That cold air conditioning is pure Disney magic at its finest.

However, what if you didn’t ride Ariel’s Undersea Adventure? Perhaps, it could become a brand new attraction themed around Finding Nemo/Finding Dory?

Note: Disney has not ever stated that Ariel’s Undersea Adventure will be replaced. But in this article, we share one fan’s idea for a retheme of the attraction.

Fans on Reddit are kicking (or should I say “fishing”?) around with the idea of Ariel’s Undersea Adventure, located near the entrance of Pixar Pier, to be replaced with a new attraction themed around Finding Dory.

Since the attraction building is placed on the outskirts of Pixar Pier, having a non-Pixar attraction near the Pixar playland seems a little out of place.

What if, for instance, The Little Mermaid building were to be re-themed to resemble the Marine Life Institute (Monterey Bay Aquarium) that sets the stage for 2016’s Finding Dory?

Look at that, The Little Mermaid attraction already has a huge dome akin to The Marine Life Institute’s and Imagineering could incorporate the “sea” (Pixar Pier’s lagoon) into the ocean that sits at the front of the building.

Rather than walking by the attraction on the boring pavement, you could cross a steel trestle bridge that sits on the “sea” and lets guests look at the newly built Marine Life Institute.

In the queue, guests could watch animated versions of Fluke the Seal, Bailey the Beluga Whale, and Destiny the Whale Shark play throughout the Marine Wildlife Institute. Don’t fret, those adorable otters would be near the load/unload area of the attraction!

Once inside the attraction, Marlin and Nemo would be trekking to find Dory! The ride layout and Omnimover System would be exactly the same, but completely re-themed around the Pixar film. Hank the Septipus would be the narrator of the attraction, taking over Sebastian’s existing role, and could lead the underwater travelers on the hunt to find his blue tang friend. Bailey and Destiny would be swimming around in the main showroom where Sebastian’s band is currently cutting the rug. The new ride would end on a heartwarming note, with Dory being reunited with her parents!

Guests would listen to the awesome Finding Nemo soundtrack and still get blasted with cool air.

This is just a fun little idea, but who knows what the future might hold for Disneyland! They could even possibly replace Nemo’s Submarine Voyage at Disneyland Park with a The Little Mermaid attraction. What do you think?

Disney has not shared any plans to change these attractions, but we’ll update Inside the Magic if more attraction rethemes are in Disneyland Resort’s future.

Do you think they should replace Ariel’s Undersea Adventure? Let us know in the comments below!