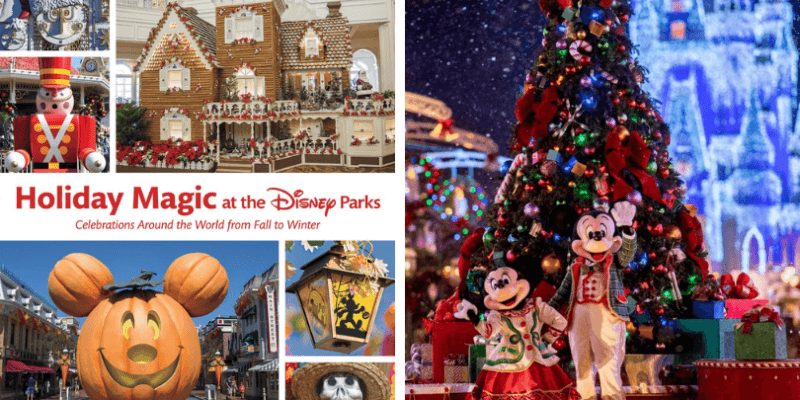 The magic of the Disney Parks during the holiday season is undeniably special every year.

Each Disney Park — from the original Disneyland to Walt Disney World, Disneyland Paris, Shanghai Disneyland, Hong Kong Disneyland, and Tokyo Disneyland — has its own unique characteristics and events for the season, but that doesn’t just extend to each of the Disney Parks. The Disney Resort Hotels and Disney Cruise Line brings to life the magic of the winter season through festivities and decorations, too.

Now you’re able to travel the world to see what makes each of these Disney Property spots so special without leaving the comfort of your home or changing out of your favorite Disney comfy clothes.

Holiday Magic at the Disney Parks

Disney Books researchers have really been traveling around the world, as earlier this year they released a book called Disney Maps: A Magical Atlas of the Movies we Know and Love. And on October 20th, Disney Books will be releasing a publication that is a collection of all the Holiday Magic at the Disney Parks.

This book features a collection of the magical pixie dust that Disney spreads across all its theme parks, resort hotels, and cruise line from November to January. Fully immerse yourself in beautiful photos, as well as extraordinary details and tidbits about all that happens at Disney for the winter season, and you’ll even start to feel like you’re actually in that enchanting atmosphere that makes each year so memorable.

“This deluxe jacketed hardcover is visual storytelling at its best. Almost 1,900 photographs (two-thirds of them taken just for this book) showcase Disney’s key locations filled with special holiday menu offerings, the biggest parade and stage productions and nighttime spectacles, the tiniest decorating details from amazing artists and designers, and, of course, the most significant historical holiday events. A harmonic trio of researchers, writers, and photographers logged more than 180,000 miles visiting every Disney park and resort across the globe, personally documenting the holiday installations through eighty thousand photographs and, wherever possible, meeting the talented and endlessly passionate artisans behind it all.

With twelve theme parks and dozens of resort hotels, plus numerous cruise ships, dining and shopping districts, and more than six decades of holiday experiences, there are a lot of pumpkin treatments and ornate trees to reflect upon. (The smallest holiday tree at a Disney property is just four inches high, while the very tallest reaches up to seventy feet.) Every parade or show requires dozens (sometimes hundreds) of creative magicians both onstage and off. And each decoration is chosen carefully to fit within a story and is expertly placed on its tree or garland by craftspeople backstage. The decor is installed onstage, maintained, and, ultimately, disassembled by technicians before it is once again cleaned, prepared, and stored in vast warehouses . . . till next year’s event. The stories and contributions from so many unsung Cast Members (often hard at work at hours of the night when others are asleep) fill these pages, along with the joys of Halloween, Christmas, Hanukkah, and New Year celebrations. Time to join the party!”

Where to Buy The Book

You can pre-order this book now from any of the below online stores.

If you’re a Gold Member for D23, you and your family can enjoy a special event next Tuesday, October 20th when Holiday Magic at The Disney Parks releases.

If you are interested in the Virtual Launch Party for the book but are not a Gold Member already for D23, you can register to become one on their website. Then you will be able to purchase a ticket for the event where you will be given an access code to watch the event on Tuesday afternoon, but if you aren’t able to watch right at 4pm PST, the special panel will be available until Friday, October 23rd at 11:45 p.m. PT.

If you are still planning a Holiday time vacation to one of the Disney Parks or interested in what’s going on at the Disney Parks this holiday season, be sure to check out all these sneak peeks as it’s just a few weeks away!

Comments Off on Experience Holiday Magic at the Disney Parks Without Leaving Your Couch!