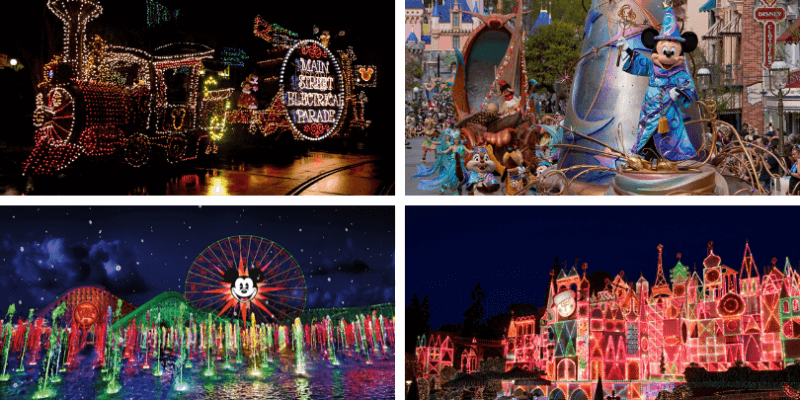 Parades are always a great way to beat the heat and just take a break from running around to ride all our favorite attractions. The Main Street Electrical Parade first debuted Disneyland during the summer of 1972, and over the past few years, we’ve been able to see this short parade come back for our enjoyment and the nostalgia.

Main Street Electrical Parade started that genre of light show-meets-parade, which paved the way for the parade we now have called Paint the Night.  Though Paint the Night typically starts in the spring during years when it is running, it often ends in the fall right before the holiday season and its amped up music is truly an energizing one that I always find myself singing along to!

Music is a big part of Disneyland history having musical events dating back to 1962 with Spring Fling and 1974 with Big Band Festival.  You’re really able to see how far we’ve come with the innovation of Disneyland entertainment throughout the years since its opening in 1955.

This is my favorite season of Disneyland entertainment is where you’ll find Disneyland’s A Christmas Fantasy parade, which is a great mixture of traditional Disney fantasy characters and characters who are ready for the winter activities.

Some of my most memorable times at Disneyland are when the castle lights up at night during the Wintertime Enchantment.  This castle lighting even usually happens twice an evening during the holiday season and anytime I stand by the castle during this, I cry tears of happiness.  During the holiday season, my favorite attraction, “it’s a small world” also turned into an entertainment icon with its holiday lighting projection show!

In 1956 during the first spring season after the opening of Disneyland, they started the Old Fashioned Easter Parade.  This parade got to be as extravagant as the Shower of Flowers the following year when helicopters dropped flower pedals over the Guests during the parade.

The start of this spring season brought us the Magic Happens parade at Disneyland.  The colors and whimsy of this parade is just the thing to encapsulate the magic feeling of Disneyland.

Parades and fireworks typically do happen all year long, but they change throughout the seasons.  So what entertainment remain throughout the year?  Shows!

Though these do change ever so often, they typically last throughout the year, years, or many years like Fantasmic! which has been around at Disneyland since 1992.  A recently more permanent show is World of Color, but my favorite is also the World of Color – Season of Light show during the holidays.

Share with us what your favorite Disneyland entertainment is in the comments below!

For help with booking your next Disneyland trip, get in touch with an Authorized Disney Vacation Planner at Academy Travel, so you can be there during magical Disney entertainment.

Comments Off on Disneyland Entertainment Throughout the Seasons