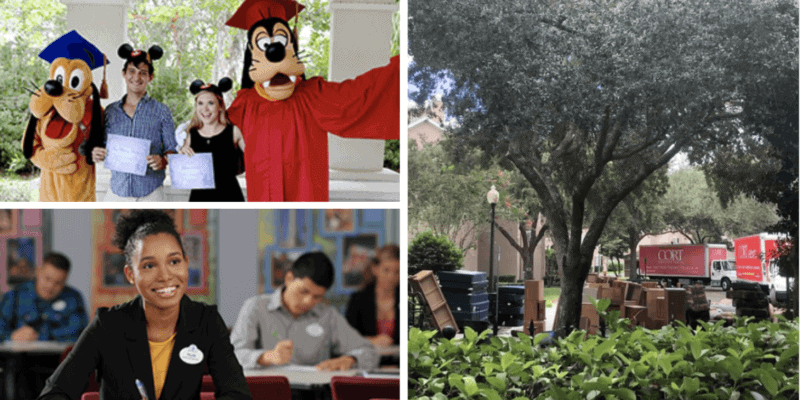 In June 2020, amid the coronavirus pandemic that shut down all six of Disney’s theme parks worldwide, The Walt Disney Company confirmed that the Disney College Program is on pause and will not be returning in the near future.

“The company will not resume the Disneyland Resort College Program for any classifications within the Agreements in which all Regular Full-Time and existing Casual Regular employees have not been recalled during the furlough period.”

Given that Disney just laid-off 28,000 Cast Members at Disney World and Disneyland — the latter of which is not likely to reopen for quite some time yet — it doesn’t seem like college students will be able to participate in the exciting program anytime soon.

Twitter user @cinderchellaaa shared a Tweet that indicated an entire Disney College Program housing complex was being cleaned out. Indeed, all of the furnishings from the residential building appeared to be getting loaded into CORT Furniture trucks.

Okay this one kind of hurts pic.twitter.com/vfrRPzr3B8

Disney is removing everything from all the Little Lake Bryan housing complexes.

Although this social media post initially seems alarming, there may be no reason for concern. Another Twitter user named Phyllis Ann shared these details in the comments of the initial post:

From this additional information, it seems like this major clean-out may not actually portend anything unfortunate for the Disney College Program. In all likelihood, the furniture is either being moved to the new DCP housing complex or being returned to CORT in favor of brand new furnishings in the Flamingo Crossing units. However, it also doesn’t seem as though there is any rush to prepare Disney College Program housing as there has not been any word of when the DCP will resume.

At this time, Disney has not given an updated statement about when the Disney College Program is expected to return. The official website for the program remains active and is the best place to find updated information about how to apply and what to expect during these unprecedented times at both Disneyland Resort and Walt Disney World Resort.

Did you participate in the Disney College Program during your university years?